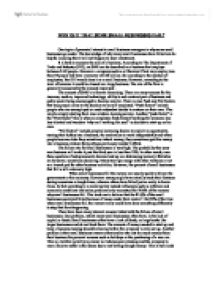 Why Is It That Some Small Businesses Fail?

WHY IS IT THAT SOME SMALL BUSINESSES FAIL? One topic of perennial interest to small business managers is why some small businesses go under. The knowledge of why many small businesses have failed can be helpful in seeing that it will not happen to your investment. It is hard to measure the size of a business. According to The Department of Trade and Industry (DTI), an SME can be described as a business that employs between 0-49 people. However a company such as a Chemical Plant may employ less than 49 people but have a turnover of �20 million. So according to the number of employees, the DTI would class it as a small business. However, according to the level of turnover it could be classed as a large business. The size of the firm is generally measured by the amount employed1. The amount of SME's is forever increasing. There are many reasons for the increase, such as; improved technology, ability to sub-contract part of business and public sector being encouraged to become smaller. There is also Push and Pull factors that help people come to the decision to be self-employed. ...read more.

Productive marketing is probably the toughest aspect of operating a business; it is also the least understood. Too many businesses spend too much time polishing the product and too little time creating awareness for it3. It's a hard lesson to learn: just having a great idea doesn't create an audience. In a competitive marketplace, a product won't stand a chance against an inferior, but better marketed, product. Small businesses, with their limited resources, underestimate what it takes to build a market presence. Marketing is an emotionally charged activity. Rarely do you find small business owners eager to receive the negative feedback necessary to reposition their product or service successfully. Another reason why some SME's fail is the lack of experience the owner has. The failure rate of small business often has more to do with lack of experience than anything else. Most entrepreneurs see their project as "their little baby". They don't want any help from any outside source; this is turn leads to problems and failure. The experience of others is a highly under-used business tool. Experience is the best teacher. You can learn a lot about operating a small business from other successful business owners. ...read more.

The first week passed and all of a sudden masses of the cheese bought was going out of date. They had not planned for this; they assumed most of the cheese would have been sold. However if they had thought about this they may not have bought as much cheese initially and perhaps just bought a little till they no there expected custom. At this point they should have asked for help from someone with experience, but they seemed too proud to do this. A couple of months past and the shop was still not making a profit. They had to pay the bills themselves, just to keep the business afloat. They had not planned for this and soon found themselves in a whole too deep to dig themselves out of. It was now too late for them to ask for advice and the shop closed down. My advice to my friend was to learn by his mistakes and try again. It is inevitable that small businesses will carry on failing. Sometimes the reason behind the failure cant be helped. However from reading this essay you should gather that the majority of the times, failure could have been prevented. In fact 82% of the time when businesses fail, the owners really could have done something differently to stop it from happening. ...read more.