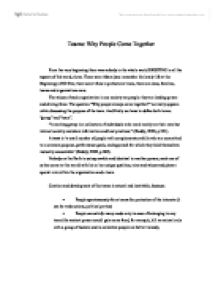 Why people come together?

Teams: Why People Come Together From the very beginning there was nobody in the whole world EXISTING in all the aspects of this word, alone. There were Adam (you remember his lonely life at the Beginning) AND Eve, there were tribes in prehistoric times, there are clans, families, teams and organizations now. The values of each organization in our society are people: they are leading power and driving force. The question "Why people always come together?" normally appears while discussing the purpose of the team. And firstly we have to define both terms: "group" and "team". "A working group is a collection of individuals who work mainly on their own but interact socially and share information and best practices." (Boddy, 2008, p.564). A team is 'a small number of people with complementary skills who are committed to a common purpose, performance goals, and approach for which they hold themselves mutually accountable' (Boddy, 2008, p.696). Nobody on the Earth is unimprovable and identical to another person; each one of us has come to this world with his or her unique qualities, aims and values and plays a special role within the organization and a team. Creation and development of the teams is natural and inevitable, because: * People spontaneously form teams for protection of the interests (it can be trade unions, political parties) * People can satisfy many needs only in case of belonging to any team (the ancient person could gain some food, for example, kill ...read more.

Yes, some will stay, because of the high need in money, but only until these problems are solved. A desire to be needful as a personality is always in the first place. "An ideology is a set of integrated beliefs, theories and doctrines that helps to direct the actions of a society (of a team in this context)." (Boddy, 2008, p.120). Ideology helps to define the purpose of a team and bring together aims of the organization and needs and desires of each member of the staff. Ideology composes the inner pervasion of each company and also influences the teams' activity. There are no successful unstructured organizations in our world, therefore we can structure any team depending on various criteria and the most important are: * The preferences existing in a team (it builds on the sympathy and aversion between the team members); * Distribution of authority in a team; * The communications existing in a team; There are 9 Basic Team Roles found by Meredith Belbin: Plant- people who bring ideas. Resource Investigator- people, who research, make the contacts and develop ideas. Monitor Evaluator- people, who make statistical and analytical researches, pragmatic. Shaper- people with high level of energy, make communicational links within the group. Co-ordinator- somebody, who is respected, can control the process and see the right ways of making the efforts. Implementer- people, who are loyal, trusted and who form the core of the driving force of the team. ...read more.

If the quantity of problems, which has to be solved increase, there comes a following stage - expansion. New people always bring some changes to formed teams, for instance, the formation of the sub-teams, which often results in disintegration of a team and initiation of new teams on its basis. An example of the largest (more that 3 million members), the most well-structured, hard-working and motivated team is an antheap. Ants are BORN with a purpose and without a question "why they are doing that?" they are divided into castes and into groups depending on their age and each one has its own duty. But it is not applicable to our society because each one of us is so versatile and has his unique opinion and qualities. May be if we disconnected our senses all the people in the world could create one single team? Perhaps, it is possible. But there appears one question: Where to get the motivation? To program it? Reference list Aranda E., Aranda L., Conlon, K., (1998), TEAMS: Structure, Process, Culture, and Politics, Prentice Hall, Upper Saddle River, New Jersey. Belbin M., (1996), Management Teams, Why They Succeed of Fail, Butterworth-Heinemann, Oxford. Boddy D., (2008), MANAGEMENT, An Introduction, Pearson Education Limited, Essex. Gusev Y., (2002), Strategiya razvitiya predpriyatij, SPBUEF, Rossiya. Lyubinova N., (1999), Menedzment- putj k uspehu, Agropromizdat, Rossiya. Mintzberg, H., (1989), Mintzberg on management : inside our strange world of organizations, Collier Macmillan, London. Naumov A., (2003), Menedzment, Gardariki, Rossiya. ...read more.