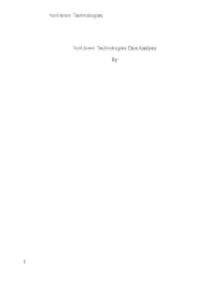 Yorktown Technologies Case Study. The largest problem that plagues Yorktown is negative media attention regarding its genetically engineered GloFish, as well as strict new regulations from several key markets for the product.

﻿Yorktown Technologies Yorktown Technologies Case Analysis By Case Recap Yorktown Technologies is a fairly new company that is marketing and introducing GloFish into the market. In 2002 Yorktown raised $500,000 fro investors under the projection that it would have $4,000,000 in profits in 2004. Sadly the company only had $500,000 in revenues and had an outstanding $620,000 in expenses leaving the company $120,000 in the red (Roger A. Kerin, 2010). Alan Blake of Yorktown Technologies is searching for what to tell the board of directors in the next board meeting. Major changes are needed in order for Yorktown to turn around and become profitable. Problem Identification The largest problem that plagues Yorktown is negative media attention regarding its genetically engineered GloFish, as well as strict new regulations from several key markets for the product. Blake is of the belief that Yorktown can be successful and despite steady growth over the past few years it has not tapped its true capacity due to distribution challenges with the product. ...read more.

Blake has been considering marketing the product on ebay and through direct internet sales to the consumer. Pricing has become a serious issue in this consideration. Competitors are selling similar products for far less than Yorktown can provide their product for. The consideration for international sales has been discussed, along with the possibility of regulating the illegal infringement of the patent through sterilization of the fish prior to sales in some areas that are difficult to regulate due to the international nature of the sales. Identifying the Root Problem Components The first problem that is plaguing Yorktown is the difficult of cost effective distribution and marketing. In the US, Yorktown has come under fire due to the genetically engineered nature of the fish. This makes the pricing of the product difficult, because the price is higher than the consumer has been willing to pay. The company has had steady sales since its inception several years ago, but is still far below projected revenues. ...read more.

This is a great opportunity with the only downfall being discussed as the price of the lease of space. Another alternative is to begin increasing marketing to the smaller independent pet stores, as well as other chain stores. This alternative will produce some increase in sales but has the potential to run into the same problems Yorktown has had with the big three distributors. The negative media that has been received may affect his alternative. The biggest problem according to Blake is the refusal of distributors to show the fish properly and showcase the in the proper lighting environment (Roger A. Kerin, 2010). Due to the nature of the fish, they are best shown under black light and dark conditions that are rare among the existing distributors. Conclusion Drastic changes must be taken in order for Yorktown to increase sales and revenues. The problems discussed must be resolved in order for this to happen. The major problem of distribution and pricing must be overcome in order for Yorktown to tap into its full potential. ...read more.