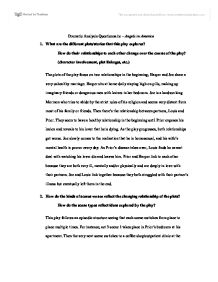 Dramatic Analysis Questionnaire - Angels in America 1. What are the different plots/stories that this play explores? How do their relationships to each other change over the course of the play? (character involvement, plot linkages, etc.) The plots of the play focus on two relationships in the beginning; Harper and Joe share a very unhealthy marriage. Harper sits at home daily staying high on pills, making up imaginary friends or dangerous men with knives in her bedroom. Joe is a hardworking Mormon who tries to abide by the strict rules of his religion and seems very distant from most of his family or friends. Then there's the relationship between partners, Louis and Prior. They seem to have a healthy relationship in the beginning until Prior exposes his lesion and reveals to his lover that he is dying. As the play progresses, both relationships get worse. Joe slowly comes to the realization that he is h********l, and his wife's mental health is poorer every day. ...read more.

With each split scene, the health of Prior and Harper progressively gets worse and worse, continuing to connect them as the play goes on. As the split scenes continue throughout the play, they get more and more frantic switching back and forth between the characters, with their relationships weakening. 4. This play features characters from a number of different kinds of worlds and levels of existence/non-existence. Distinguish the different worlds/existences that they come from. What qualities, ideas, meanings, or functions do these character-worlds lend to the play? Harper has an imagination that dreams up dangerous men with knives hiding under the sofa or bed. She makes up a traveling agent that takes her to Antarctica where she meets a friendly Eskimo, despite the fact that Eskimos don't live in Antarctica. She also makes up the fact that she is pregnant. All these fantasies are her hallucinations. The made up men carrying knives represent her husband, Joe. This just shows how deeply she loves him but not loving her in return is piercing to her heart and she eventually develops a horrid fear of that pain and hurt. ...read more.

When in need, Louis tends to ask God for help or for an answer, usually having something to do with his lover, Prior. He does this quite a lot near the end, showing that his relationship with Prior falls apart eventually. 7. What are the most significant ideas in the play? Depending on who is leading, politics can play a large role on what is and is not accepted in society. One's identity in society seems so important; one must be a certain way to fit in. Not only race, but religion and even disease makes someone viewed as something completely different. Louis mentions during the coffee shop scene, that race doesn't define us, politics do. 8. What significance do you see in the full title and its subtitle, a gay fantasia on national themes? The title portrays the idea of having a different view or perspective on society and the community as a whole from a h********l's point of view. It sets the readers/audience members up for an enlightenment of r****m, religion, and politics. ...read more.