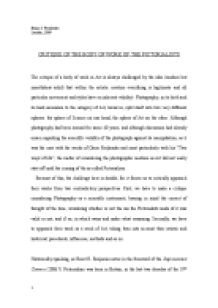 Critique of the body of work of the Pictorialists

ï»¿Borja S. Fernández London, 2009 CRITIQUE OF THE BODY OF WORK OF THE PICTORIALISTS The critique of a body of work in Art is always challenged by the idea (modern but nonetheless solid) that within the artistic creation everything is legitimate and all particular movement and styles have an inherent validity). Photography, in its birth and its hard ascension to the category of Art, however, split itself into two very different spheres: the sphere of Science on one hand, the sphere of Art on the other. Although photography had been around for some 40 years, and although discussion had already arisen regarding the scientific validity of the photograph against its manipulation, as it was the case with the works of Oscar Reijlander and most particularly with his “Two ways of life”, the matter of considering the photographic medium as Art did not really start off until the coming of the so called Pictorialism. Because of this, the challenge here is double, for it forces us to critically approach their works from two contradictory perspectives. First, we have to make a critique considering Photography as a scientific instrument, bearing in mind the current of thought of the time, wondering whether or not the use the Pictorialists made of it was valid or not, and if so, in which ways and under what reasoning. ...read more.

(fig. 1 & 2) In fact, Pictorialism looked not only at classical art, but at all other artistic movements such as the coetaneous Impressionism, Symbolism and even, in its later stages, at forms as abstract and far from photography as Cubism. Fig 1: Frederick H. Evans, 1903 Fig 2: Pierre Dubreuil, 1900 ?York Minster: in sure and certain hope? ?Entombment of Christ? (detail) Taking now the side of the Pictorialists, it is nothing but a fact that Art, just like everything else, has always leaned on what came before, and that this support is needed for some time in order to prepare the way for a breakthrough. Several were the characteristics that Pictorialists used in order to distance photography from its scientific realm and approach the world of Art. Among these, the most important and most commonly cited are the use of a soft focus (against the characteristically sharp focus of the fine mechanical instruments trough which even at the time photographs were taken), a big size printing (adding to that foggy atmosphere with the inherent loss of quality and also imitating the usual sizes of paintings, which gave prominence to the works) and the use of exotic and rare processes such as the gum bichromate and the toning of prints (against the realism of factual photographs and the spreading of the point ...read more.

?The haystack? (right) The Pictorialists themselves had difference of opinions, the major one related to the legitimacy of manipulating the negatives, which separated them into two main groups, the ones accepting this manipulation, and the ones opposing it, better known as straight-photographers. Straight Photography had its peak in America, with the Photo Secession group led by Alfred Stieglitz (Fig. 7), which funded the publication Camera Work. It is largely to this group and their published prints in the mentioned publication that Photography today owes its status as Art, and as Hostetler (2000:45) noted, they ?were instrumental in establishing photography's expressive potential and demonstrating that its value laid beyond reproducing the outlines of the world around us?. Fig. 7: Alfred Stieglitz, ?The steerage?, 1907 In conclusion, when analyzing the work of the Pictorialists, we find a vast body of work which has in its majority kept its legitimacy to the present day. Both when considered under the light of the time and under the light of today?s standards, their work proves to be a strong statement in favour of the artistic nature of photography and a central piece in the History of this medium. Thanks to their works and ideas, but most importantly due to the fact that they chose to defend them against a world which would not agree with them, today Photography has an almost indisputable place in the Pantheon of Arts which wouldn?t have been possible otherwise. ...read more.