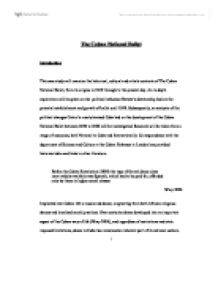 The Cuban National Ballet Introduction This case study will examine the historical, cultural and artistic contexts of The Cuban National Ballet, from its origins in 1948 through to the present day. An in depth exploration will be given on the political influence Batista's dictatorship had on the potential establishment and growth of ballet until 1959. Subsequently, an analysis of the political changes Castro's revolutionised Cuba had on the development of the Cuban National Ballet between 1959 to 2008 will be investigated. Research will be taken from a range of resources, both National to Cuba and Internationally. Correspondence with the department of Science and Culture at the Cuban Embassy in London has provided historical data and links to other literature. Before the Cuban Revolution (1959) the type of formal dance class most widely available was Spanish, which had to be paid for, afforded only by those in higher social classes Wray 2006 Implanted into Cuban life is music and dance, originating from both African religious dances and localised social practices. Over centuries dance developed into an important aspect of the Cuban way of life (Wray 2006), and regardless of restrictions and state imposed limitations, dance in Cuba has remained an inherent part of its national culture. The Creation of The Cuban National Ballet - Alicia Alonso In 1937 Alicia and Fernando Alonso wed, and continued their growing dance career by moving to New York and studying at The School of American Ballet( Laballe 2008) ...read more.

'Virtually everything in their repertory is implicitly political, right down to the choice and execution of classical works such as Giselle and Coppelia' (Baker, 1978). Castro's ambitions to lead Cuban arts into an International artistic context reflected in the companies choice of Western ballets, with no connotations to the Cuban 'pro-revolutionary and anti-imperialist' context (Baker 1978). This law allowed Alonso to create an important cultural and artistic context for her dance company. The political backing allowed for the compulsorily wide spread growth of the ballet culture, and placed a public sense of importance on this cultural growth. In 1959, when the government support secured the existence of the company and school, the methodology began to gain support in countries south of the United States for its academic style and Latin spirit Horosko, 1991, p.66 In 1960, the first International Ballet Festival of Havana was created. This historic milestone, with the joint efforts of The National Ballet of Cuba and Instituto Nacional de la Industria Tur�stica, as well as the cultural organizations of the government, has provided a cultural landmark by which the arts in Cuba diffuse. ( Ministry of Tourism Cuba 2008) Prior to Castro, the artistic context of the arts and in particular ballet, had little if any grounds for innovative development. The severe lack of funding during Batista's political regime, of recognition, and of political support even by the Ministry of Culture, forced a stalemate of artistic development and progression. ...read more.

This democratic shared judgement demonstrates a vital part of the company's social role. From where the company started some fifty years ago, the strength of their repertoire and international prowess continues to grow. This can be seen from the growth of performances at Sadler's Wells by the Cuban National Ballet, and dancers such as Carlos Acosta. The general development of Cuba in terms of their industrial expansion, socio-cultural establishment and economic growth due to increased revenue from tourism, has meant an increased stability for the country and increased stability for their cultural expansion. Under the Castro regime it has been difficult for any enterprise to progress without the acting or tacit assistance of the state. However with the recent resignation of Fidel Castro, and the appointment of his brother Raul Castro, it may be reasonably hoped that some eventual easing of the American and other sanctions and embargo's placed on this country throughout his tenure is gradually eased. This would be providing, however, that there is some sort of movement towards a more 'democratic' system. The results of this on The Cuban National ballet? Possibly an increased availability for the dancers to travel and perform, a continued increase in global awareness of The Cuban national ballet company, and its opportunity to interact on a greater scale with other Ballet Companies. The possibilities for the company are hopeful. In despite of their past struggles, the company has always continued to make progress in the face of adversity, and it seems this early growth is set to continue and expand. ...read more.