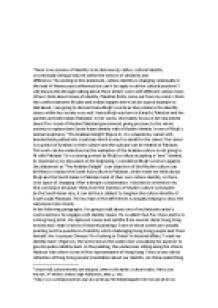 How artists are engaging in the the issues of indentity.

﻿?There is no essence of identity to be discovered; rather, cultural identity is continually being produced within the vectors of similarity and difference.?[1]According to this statement, culture identity is changing continually in the lead of likeness and unlikeness but can it be apply to all the cultural position? I will discuss this through talking about three artists? work with different culture roots. When I think about issues of identity, Pakistan firstly come out from my mind. I think the conflict between Muslim and Indian happen there can be a good example to talk about. I am going to discuss Huma Mulji?s works as they relate to the identity issues within her society very well. Huma Mulji was born in Karachi, Pakistan and her parents are both Indian Pakistani. In her works, she mainly focus on her discontent about The trend of Muslim Pakistani government giving pressure to the whole society to replace their South Asian identity with a Muslim identity. In one of Mulji?s animal sculptures, ?The Arabian Delight?(figure 1), it is a taxidermy camel with bended body putted into a suitcase which is way too small for the camel. The camel is a symbol of Arabian or their culture and the suitcase can be related to Pakistan. ...read more.

Does Chow agree with this man and admitted himself as not a ?real? Chinese. Chow shows his attitude and response courageously in another piece of his enamel paintings. In Fist of fury 1991, ?we are Chinese?(figure 4), it is a clear statement of Chow to show his want of claiming himself a Chinese proudly. In the mean while, Chow seems want to prove that there is a harmony between Western and Eastern culture through his photo installation series. He use photo as paint to recreate some of the well known Western master pieces and replace the figures with famous characters in some of the classic Chinese novels. In ?rides in a solitary journey? (figure 5), Chow imitated Jacques Louis David?s ?Napoleon crossing the Alps?(figure 6).Chow replaced Napoleon with a great marshal in Chinese history who showing the same motion of the original painting and kept almost exactly the same background. In the new version, Chow chose a playful way instead of create a epic atmosphere like the original painting. I believe the reason of Chow chose this way to recreate the master piece is to show that when combining two cultures, which also have great history backgrounds, you can still be creative, energetic and limitless. In response to my discussion in the beginning, I think Chow?s work can fully support the statement which culture identity is changing continually. ...read more.

Because of its blackness, viewers have to view the text closely and carefully to make sure they don?t miss any part. I believe it is an intention of Ligon to produce this work in this specific way to say that people have to see Black race with their content but not only criticising them only because of their skin colour.[7] In response to my discussion in the beginning, as most of Ligon?s works are related to problem of African American suffering discrimination through years seems the issue is going on and without a significant improvement. In my opinion, the changes of African American ?s cultural identity can be seen in Ligon?s works. In his ?Runaway? portfolio shows the history of Black slavery and pointing their race used to have a lower class reputation in the past century. As Ligon?s works themselves and the literary materials used in his works are also evidences showing they are having a well-improved culture identity. To make a conclusion, I believe I have made certain that cultural identity is revising itself through the passing time after I putted my discussion together with three artists who come from different cultural backgrounds. Hopefully, the changing of cultural identity can bring harmony to different races but less conflict. In the end, I want to share the most importance message I have learnt by doing this essay, treat all the culture with respect. ...read more.