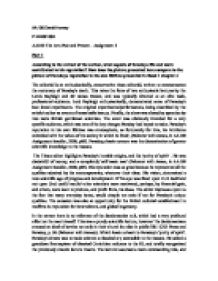 OU The Arts Past and Present - Assignment 3. Commentary on an article on Faraday and analysis of two poems about cats.

AA100 David Harvey PI B4591589 AA100 The Arts Past and Present - Assignment 3 Part 1 According to the extract of the author, what aspects of faradays life and work contributed to his reputation? How does the picture presented here compare to the picture of Faradays reputation in his own lifetime presented in Book 1 chapter 4 The editorial is an enthusiastically, conservative times editorial, written to commemorate the centenary of Faraday's death. This takes the form of two enthusiastic lectures by the Lords Rayleigh and Sir James Dewar, and was typically directed at an elite male, professional audience. Lord Rayleigh enthusiastically, demonstrated some of Faraday's best loved experiments. The original experiments/performances, being described by the article's editor as events of remarkable beauty. Finally, the show was closed by speeches by two more British gentleman scientists. The event was obviously intended for a very specific audience, which was one of the key changes Faraday had hoped to make. Faraday's reputation in his own lifetime was stratospheric, as fortunately for him, his 'attributes coincided with the values of the society in which he lived', (Falconer with James, in AA100 Assignment booklet, 2008, p89). ...read more.

He was also a consummate actor/performer, and, it has been argued his more pious persona could have been a pretence. Despite the apparent spontaneity and infallibility of his spectacular experiments, they were rehearsed relentlessly beforehand, in the solitude of his workshop. He also had elocution lessons to help project his voice, and made constant refinements to his demonstrations, to show his level of confidence, as well as ability. In conclusion we can gather that Faraday was a man of great simplicity in nature.and he felt himself more humble and as a servant to god and to the people to unravel the nature of science and its potential. In doing so he elavted himself to a position of high elevation which he reluctantly had to accept due to his popularity and roles in filled during his career as a man to be admired and consulted upon when called for. Word count 598 AA100 The Arts Past and Present - Assignment 3 Part 2 - Reading Poetry: The Faber Book of Beasts. Read the following poems by Thom Gunn ('Apartment Cats') and Thomas Flatman '(An Appeal to Cats in the Business of Love') ...read more.

To think of this cat stalking away does not denote a retreat in my mind, more a defiance with dignity intact. Although the rhyme used in 'An Appeal...' emphasises the imagery being portrayed throughout, perhaps the most effective image of the poem comes when Flatman's cats 'Keep their feet, mount their tails, and away!' In the split second before a cat leaps off to its new perch there often comes a slight steadying - much in the same way a person might bend the knees slightly to add momentum to a jump - and Flatman captures this brief pause exquisitely, as the cats 'mount their tails'. The exclamation mark which ends the poem is also really quite effective, sitting perfectly poised like a cat's tail. The overall comparison which stood out for me between the poems, was the way in which Thom Gunn and Thomas Flatman both provoke us to witness our world by way of a leonine perspective, and, more specifically, they seem to be asking us to bear in mind the feminine side of existence. I would even recommend reading the poems again - through anthropomorphic goggles - and suggest that the 'Apartment Cats' could be viewed as positively lewd in this context, while perhaps 'Cats in the Business of Love' were simply as raunchy as decorum may have allowed. ...read more.