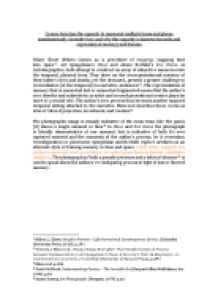 ﻿Comics form has the capacity to represent multiple times and places simultaneously. Consider how and why this capacity is harness towards and expression of memory and trauma Hilary Chute defines Comics as ?a procedure of mapping: mapping time into space?[1]. Art Spiegelman?s Maus and Alison Bechdel?s Fun Home, as Autobiographics, both attempt to construct an array of subjective memories into the temporal, physical form. They draw on the cross-generational memory of their father?s lives and deaths, yet ?the deceased?present a greater challenge to reconciliation [of the temporal] via narrative endeavour?[2]. The representation of memory that is somewhat lost or somewhat fragmented means that the author?s own identity and subjectivity as artist and second-generational creator plays far more of a crucial role. The author?s own process thus becomes another nuanced temporal setting attached to the narrative. Elmwood describes these works as sites of ?sites of projection, investment, and creation?[3] The photographic image is visually indicative of the comic time; like ?the panel, [it] shows a single moment in time?[4] In Maus and Fun Home the photograph is literally demonstrative of one moment, but is indicative of both it?s own captured moment and the moments of the author?s process, be it recreation, reconfiguration or placement. ...read more.

This inadequacy is explained alongside the imprinting absence of Richieu ? ?he was mainly a large blurry photograph in my parent?s bedroom?[11]. In doing so Spiegelman presents these two in unity. His fear of misrepresentation is deeply embedded in his inability to represent the brother he never knew. This scene constructs the second narrative time that is simultaneously understood as part of the wider concept of Richieu. The two times realms of the photo of Richieu itself and Spiegelman?s feelings around it are constructed separately in the narrative to give a sense of disjunction, to demonstrate that he cannot develop or narratively connect with Richieu?s life. Spiegelman limits his image of Richieu in the comic time frame of the panel Rather than layering the image with time moments in support his own interpretation, Spiegelman presents a memory trapped in its own time, questioning his abilities to represent the past in linear temporal space. Scott McCloud explains that ?Each panel of a comic shows a single moment in time?[12] Richieu?s photograph represents a singular idea in time, just as bleeding represents a haemorrhaging of the time frame. These elements simply demonstrate the limitation of Spiegelman?s memorial concept of Richieu. ...read more.

The photos surround Vladek?s words ?All what is left, it?s the photos?. Spiegelman explains that darkness surrounding an image ?functions to have this kind of black bracket?around this one moment? Which to me is a very powerful way of understanding what was happening.?[20] Although this is in reference to an earlier page in Maus, the visual effect on both pages is similar. The many photos both inform and impose upon Vladek?s sense of loss, giving a sense of the crushing yet limited memories of the passed family members. The photo album represents both an absence of the many relatives, and the presence of characters who cannot be developed fully. In contrast to Richieu, the gutters begin to be obscured and eventually disappear, meaning that there is no pause between the individual memories to create a clarifying flow between them. The photos become a ?visual equivalent of a broken record?[21]. The physical time representation is fractured, and the narrative is jolted with a series of abrupt and singular moments. Although they represent one concept, they cannot be incorporated smoothly into the telling of memories. Near the end of the narrative, beginning to present a multitude of figures that can?t be fit in to the established narrative form makes the audience question the representative memorial integrity of the story that has been evolving so far. Unity. Narrative integrity, breakdown of narrative undermines statements. ...read more.