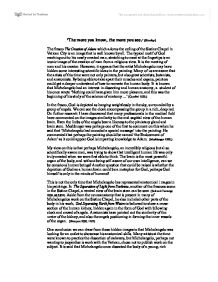 'The more you know, the more you see.' (Huxley) The fresco The Creation of Adam which adorns the ceiling of the Sistine Chapel in Vatican City is an image that is well known by all. The typical motif of God reaching out to his newly created man, stretching to meet at the fingertips is an iconic image of the creation of man from a religious view. It is the meeting of man and his creator. However, it appears that the artist Michelangelo may have hidden some interesting scientific ideas in the painting. Many of us are aware that the artists of this time were not only painters, but also great scientists, botanists, and anatomists. By being able to take apart their muscles and organs, painters could get a deeper understand of how to recreate the human body. It is known that Michelangelo had an interest in dissecting and human anatomy, a student of his once wrote 'Nothing could have given him more pleasure, and this was the beginning of his study of the science of anatomy...' ...read more.

Aside from the neuroanatomy that is present in many of Michelangelos work on the Sistine Chapel, he also included other parts of the body in his work, God Separating Earth from Waters is believed to show a cross-section of the human kidney, hidden again in the form of God with billowing cloak and crowd of angels. Anatomists have pointed out the similarity of the ureter of the kidney, and also the angels positioning in forming the inner vessels of the organ. (Eknoyan 2000. 1192) One conclusion we can draw from these hidden images is that Michelangelo was looking for an outlet to showcase his anatomical skills. Many artists at the time were known to practice the dissection of cadavers, but Michelangelo, perhaps not wanting to jeopardise is work with the Vatican, chose not to publish work on the subject. It is said that Michelangelo once dissected the body of a young, rich Florentine, whose family then sought revenge, and we can take this as reason enough for him wishing to keep his work to himself. ...read more.

(Lubbock 2007.) On further thought I have come to a conclusion that perhaps Michelangelo was making another nod to the anatomical message of his painting. The near-connection of the creator and Adam could represent the synapses of the brain and body, which link the mind itself to the physical form, thus showing how God may exist only in the mind of the faithful, yet His presence affects many followers personal actions. After much research I have unveiled just some of the theories surrounding this painting. It is clear that Michelangelo had coded secret images into his paintings for only the enlightened to understand. Perhaps he intended to make a point about the connection of the mind to the body in the metaphor of God connecting to Adam. I think perhaps this view is rather atheist, and we must consider that Michelangelo was a religious man. On this thought I have concluded that he merely intended to showcase his anatomical knowledge to those who were capable of seeing it, and in the process get the best of both worlds, being viewed as a influential artist of the Vatican, and also an intelligent anatomist to the scientific world. ...read more.