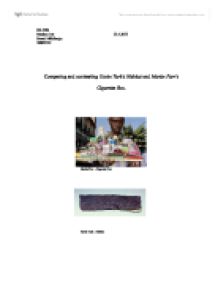 The works that will be compared and contrasted in this essay are Gavin Turk's Habitat, a nylon sleeping bag cast in bronze, and Martin Parr's photograph Cigarette Box, from his collection Dakar.

HA1504 Modern Art 21.4.2011 Emmi M�kiharju 50902732 Comparing and contrasting Gavin Turk's Habitat and Martin Parr's Cigarette Box. Martin Parr - Cigarette Box Gavin Turk - Habitat The works that will be compared and contrasted in this essay are Gavin Turk's Habitat, a nylon sleeping bag cast in bronze, and Martin Parr's photograph Cigarette Box, from his collection Dakar. Both artists are infamous for their controversial works that picture modern society from angles unusual to many. Gavin Turk, a Young British Artist, uses everyday, ugly objects and glorifies them with the use of bronze. Martin Parr photographs mainly Britain at its low points. He is known for his pictures of obese people and chain smokers, for example. He also has projects outside of the UK, such as Dakar. Even though Habitat and Cigarette Box are completely different forms of art, one a photograph and the other a sculpture, but they both share a criticism of society and modern life. Consumerism is a topic that both artists are keen on presenting in their works. ...read more.

The natural colors of the background, and the use of complimentary colors, such as green and red, create a painting-like quality to the photograph. Different forms of art aside, both artists, Martin Parr and Gavin Turk share a a critique of society that is obvious in their pieces. Turk's way of using a precious metal to cast a dirty, old sleeping bag, is a strong statement of how class systems still exist, in a way. Historically, bronze has been used in sculptures of lords or generals, usually on podiums that force the viewer to glance up. In this case, Turk used bronze on an item that is associated with the lower class, the homeless to be precise that society looks down on figuratively speaking, as well as literally. This creates an interesting juxtaposition of the higher class and the lower class. Martin Parr also uses similar techniques in his photography, with most photos dealing with consumerism. Dakar, the exhibition where Cigarette Box was presented, has pictures with, again, a juxtaposition of poverty with the ever growing need to consume. ...read more.

Even without the bronze cast, Habitat manages to draw attention and wonder to it. Seen on the street, a sleeping bag would go unnoticed, but in an art gallery, it is very much noticed either positively or negatively. The earthy tones and soft looking surface is comforting and harmonious in an unconventional way. Gavin Turk and Martin Parr are unorthodox artists, and their works relate the same stylistic manner. Both Habitat and Cigarette Box acquire a strong statement about society and the modern day world. Judgement is passed equally on consumerism, as well as on social issues, such as poverty and homelessness. Parr, as a photographer, effortlessly captures scenes and moments where people are presenting themselves in bad situations. Cigarette Box is not as much about only humanity and human nature, but about how society is changing, presented with an mischievous, ironic twist. Turk has a more serious declaration against social inequality. His work, even without further analyzation is obviously meant to make the viewer contemplate the roles we take in society. Both artists are effective in their individual styles, and even though they might appeal to different audiences, they are alike in many ways. ...read more.