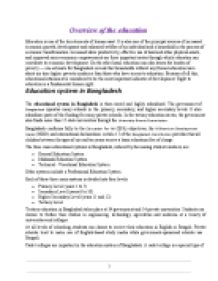 Analysis of the Education System of Bangladesh.

ï»¿Overview of the education Education is one of the key elements of human asset. It is also one of the principal sources of increased economic growth, development and enhanced welfare of an individual and a household in the process of economic transformation. Increased labor productivity, effective use of land and other physical assets, and improved socio-economic empowerment are three important routes through which education can contribute to economic development. On the other hand, education can also lessen the burden of poverty â one estimate for Bangladesh reveals that households without any formal education have about six time higher poverty incidence than those who have access to education. Because of all this, educational attainment is considered to be the most important indicator of development. Right to education is a fundamental human right. Education system in Bangladesh The educational system in Bangladesh is three-tiered and highly subsidized. The government of Bangladesh operates many schools in the primary, secondary, and higher secondary levels. It also subsidizes parts of the funding for many private schools. In the tertiary education sector, the government also funds more than 15 state universities through the University Grants Commission. Bangladesh conforms fully to the Education For All (EFA) objectives, the Millennium Development Goals (MDG) and international declarations. Article 17 of the Bangladesh Constitution provides that all children between the ages of six and ten years receive a basic education free of charge. The three main educational systems in Bangladesh, ordered by decreasing student numbers, are: 1. General Education System 2. Madrasah Education System 3. Technical - Vocational Education System Other systems include a Professional Education System. Each of these three main systems is divided into four levels: 1. Primary Level (years 1 to 5) 2. Secondary Level (years 6 to 10) 3. Higher Secondary Level (years 11 and 12) 4. Tertiary Level Tertiary education in Bangladesh takes place at 34 government and 54 private universities. ...read more.

and when income level increases peoples life living index also becomes better, child education, mortality rate, maternal health, nutrition increases , while child marriage, women repression, polygamy, women empowerment also increases, Which brings overall socio-economic development. Studies by the US Census Bureau and many other agencies have consistently shown that people with a higher level of education make more money than those with less education. For example, the US Census Bureau issued data in July of 2002 that shows the following: Education and Annual Income Highest Education Level Achieved Annual Income (1999) Doctoral Degree $89,400 Professional Degree $109,600 Master's Degree $62,300 Bachelor's Degree $52,200 Associate Degree $$38,200 Some College $36,800 High School Graduate $30,400 Not High School Graduate $23,400 It has also been shown that this higher level of annual earnings translates into significant increases in overall lifetime earnings. The US Bureau of Labor Statistics data from 2001 show the following: Education and Lifetime Income Highest Education Level Achieved Lifetime Income (40 years) Bachelor's Degree $1,667,700 Associate Degree $1,269,850 High School Graduate $994,080 Not High School Graduate $630,000 Higher levels of education payoff in lifetime income in a big way. The US Bureau of Labor Statistics has also shown that the unemployment rate steadily drops with higher levels of education. Unemployment for non-high school graduates was 6.5% in 2000, 3.5% for high school graduates, and 2.3% for those with an associate degree. This is an universal picture applicable for all country all over the world. Our country is not on different window on this sector. Thus education makes a difference. Education is strongly related with rise in income level. Here This scatter diagram shows a few things about the relationship between two variables. The percent of people with Bachelor's degrees is treated as the explanatory variable, while the personal income is treated as the response variable. By looking at the graph, it is evident that the two variables have a positive association, that is, when one value increases, the other also increases. ...read more.

The cabinet meeting chaired by Prime Minister Sheikh Hasina approved the new policy. The policy synopsis says primary education will be free, for all and compulsory up to class-VIII and stipends would be given to students on the basis of results in class V. All students will have to study their own religion and ethics. It said the secondary education level would be from class-IX to class-XII and a uniform curriculum and syllabus will be followed in general, madrasa and vocational levels. The compulsory subjects are Bangla, English, Mathematics, Bangladesh Studies, Paribesh Parichiti (education on social environment and climatic change), Information Technology and Science. On higher education, the policy advised turning all three-year graduation courses into four-year honors courses in phases. A student completing a four-year honours course will be entitled to all professions in his field. The committee proposed decentralization of the National University with centers in all divisions. These centers will later turn into universities and colleges in its jurisdiction will be affiliated to it. The policy says technical education institutions would be established in every upazila and the number of educational institutions on polytechnic, textile and leather will be increased. On madrasa education, it said the students of primary and secondary level must study uniform curriculum and syllabus. Teachers will be given more facilities alongside more and modern training, the policy said. It said steps would be taken to frame an integrated education law and form a permanent education commission. Ministry of education has submitted a total budget of sixty nine thousand crore taka to government which will be spend at the next nine years to achieve vision 2021 & to make the country free from illiteracy. In addition recent government is thinking to increase free education up to graduate level. Cost benefit analysis Findings 1. Public finance By- Harvey S. Rosen 1. Economics of the public sector By-Joseph E. Stiglitz 1. Website 1. Ministry of education 2. Ministry of finance 3. Wikipedia 4. Economic review 5. Bangladesh bureau of statistics ________________ ________________ ...read more.