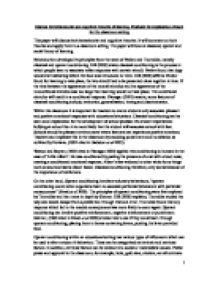 Discuss the behaviourist and cognitive theories of learning. Evaluate the implication of each for the classroom setting

Discuss the behaviourist and cognitive theories of learning. Evaluate the implication of each for the classroom setting This paper will discuss both behaviourist and cognitive theories. It will comment on both theories and apply them to a classroom setting. The paper will look at classical, operant and social theory of learning. Behaviourism developed its principles from the work of Pavlov and Thorndike, namely classical and operant conditioning. Hill (2003) states classical conditioning is the process in which people learn to associate reflex responses with certain stimuli. Pavlov found that dogs would start salivating before the food was introduced to them. Hill (2003) affirms Pavlov found for learning to take place, the two stimuli had to be presented close together in time. If the time between the appearance of the neutral stimulus and the appearance of the unconditional stimulus was too large then learning would not take place. The conditional stimulus will result in a conditional response. Flanagan (2001) asserts, some features of classical conditioning include; extinction, generalisation, timing and discrimination. Within the classroom it is important for teachers to ensure students only associate pleasant and positive emotional responses with educational situations. ...read more.

However, Gadsdon et al (2005:20) argue, "not all reinforcers are administered by the teacher. Peers themselves have an effect on how the learner behaves". Despite being told off by the teacher, if the learner gains approval from peers, then others may choose to misbehave to gain the same social reward. Fontana, (1995 cited in Gadsdon et al 2005) laid out a number of practical implications to offer the best educational practise for teachers. Some examples which show definite links to the three theories of behaviourism are; to make lessons interesting and relevant, be consistent and fair, don't be over familiar and convey confidence and good organisational skills. Cognitive development is the study of how mental activities develop. The cognitive developmental approach focuses on how thinking changes in age-related stages. Flanagan (2001) affirms the main essences of Piaget's theory are as follows; there are qualitative differences between child and adult thinking, biological approach and language is the outcome of a generalised cognitive ability. Alternative cognitive structures increase with age: schemas and operations. Invariant cognitive structures are assimilation and accommodation. The development is 'driven' by disequilibrium. Thus, learners go through different stages of development. ...read more.

Bruner believed language train could speed up cognitive development, thus putting more emphasis on the significance of education from others. Bruner stressed education and social interaction as major influences upon cognitive development (Hill 2003). Both Bruner and Vygotsky argued with Piaget's firm belief of readiness and disputed that teachers should actively intervene to help a child in their understanding. The teacher provides the tools required for the child to develop cognitively by providing structure, direction, guidance and support, not just the facts. The following concepts are important in education, according to the theories of both Bruner and Vygotsky: the spiral curriculum, scaffolding and the zone of proximal development. In conclusion, this paper shows that there is a place for both theories in an educational setting which needs to meet the needs of the learner by having a variety of methods, as there are different learners who require different learning styles. Along with the behaviourist and cognitive theories, there is also a place for the humanist theory which considers the learners feelings. I feel that cognitive development is important as it empowers the learner and the facilitator brings about social cohesion. However, there is a place for the behaviourist theory because learners need reinforcers, they need support and guidance and importantly structure which allows the learners to progress. ...read more.