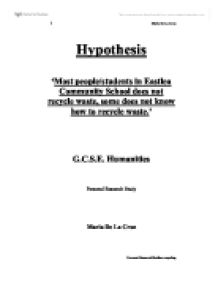 Hypothesis - 'Most people/students in Eastlea Community School do not recycle waste, some do not know how to recycle waste.'

Hypothesis 'Most people/students in Eastlea Community School does not recycle waste, some does not know how to recycle waste.' G.C.S.E. Humanities Personal Research Study Maria De La Cruz Contents Introduction Personal Research Study Focus Hypothesis and Sub-Questions Pilot Questionnaire Design Review of Pilot Questionnaire Choice of Sample Results Table Findings of Questionnaire Questionnaire Conclusions Review of Questionnaire Structured Interview Interview Notes Findings of Interview Interview Conclusions Secondary Sources Evaluation of Secondary Sources Introduction My study is based on the environmental issue part of the GCSE Humanities syllabus. I will investigate the topic of waste and recycling. I chose this topic because of its interesting facts about littering and rubbish. I wanted to discover the world of rubbish and how it effects the environment and people. I wanted to know how much rubbish is being produced, what the government are doing about it, and what they are planning to do to reduce or even stop the increasing rubbish produced in this country. Personal Research Study Focus For my Personal Research Study, I have chosen to look at the topic of waste and recycling. This is because there are many interesting facts about how many tonnes of waste are produced by each household in the United Kingdom. For instance there are twenty-three million tonnes of rubbish thrown out each year from British homes. Not only household rubbish affects the environment, but also what we do as individuals. Waste is causing big problems both globally and my local area in London. I have read that the U.K only has five to seven years left, until the space runs out for rubbish to be contained. All of the waste and the burning of these waste can cause a rise in pollution levels. Methane gas and toxic chemicals are being produced everyday, mainly from factories and this can be a danger to both humans and to wild life. ...read more.

Results Table My pilot questionnaire results, when placed in a table, gave the following results: Question: 1 a) Aluminium cans b) Plastic c) Paper d) Glass bottles None Do you or your family collect any of the following? 11 3 2 0 4 Question 2 a) Baskets b) Re-usable plastic bags c) Trolley d) New plastics (collected at check-out) What type of bags does your family use for shopping? 2 0 5 13 Question 3 a) All of it b) Half of it c) Quarter of it d) I don't bother Does your household use a lot of paper, how many of that is recycled? 7 4 0 9 Question 4 a) Re- usable b) Disposable What type of kitchen towel/ cloth do you use? 12 8 Question 5 a) Throw it away in the bins b) Don't bother to throw it away c) Throw it on the floor When you eat outside, do you? 5 10 5 Question 6 a) Yes b) No Are you aware of the fact that in five to seven years time, land for waste to be dumped on will run out? 4 16 Question 7 a) Yes b) No Do you think that people should take action now, to save Earth from these environmental issues? 20 0 Question 8 a) Yes b) No Does your family separate plastics, tin cans etc, from each other? 2 18 Question 9 a) Yes b) No Do you ever set examples to your friends and family to recycle or to throw it in the bins and not on the floor? 6 14 Question 10 a) Yes b) No Would you ever consider taking a job involved saving the environment from pollution or other over-flowing waste? 20 0 Findings of Questionnaire For my first question, my results table show that 80% of people do collect Aluminium, Plastic and Glass. However 20% do not collect any of the materials to recycle. ...read more.

I think that Ken Livingston is the strongest argument against littering as he describes well in detail, as how much he is disappointed with the society about the litter issue. He has given many reasons why we should stop littering; one is that the litter space in the UK will soon be running out. He does not only express his thoughts but refers to the facts. There was also an article called 'A throwaway society'. The article states the true facts of how many, as a percentage, of us is not recycling in one household. The facts mentioned relates accurately with my hypothesis. Conclusion During writing this coursework, I have come to a conclusion. As a result of my investigation, I still agree with my hypothesis 'Most people/students in Eastlea Community School does not recycle waste, some does not know how to recycle waste.' This leads me to think that Eastlea students not only have no idea of how to recycle, but also don't know how to put their waste in the bin. In one of my interviews, I interviewed a site supervisor in Eastlea school (Derek Mitchell.) As a site supervisor, he knows the biggest problem of the school...LITTER! He told the class that the floors were being used as the bins. He added that Eastlea students do not bother to put their rubbish in the bins provided. This is exactly relating to hypothesis. In my research, I came across books and articles that stated that, there are many appalling'consequences of too much litter in this country. England has the biggest problem of litter in the whole of Europe. This again relates to hypothesis, but because of this information, I know that not only does the students have no idea of how to recycle, but most of the people in England. Through out this investigation and research, my results have proven my hypothesis is completely true. My investigations and results of my investigations, backs up that my hypothesis is accurate. Both the interviews and information, tells me that human beings lacks in the respect of the environment. ...read more.