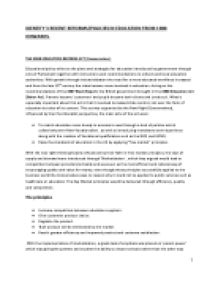 ﻿IDENTIFY 3 RECENT REFORMS/POLICIES IN EDUCATION FROM 1988 ONWARDS. THE 1988 EDUCATION REFORM ACT (Conservative): Educational policy refers to the plans and strategies for education introduced by government through Acts of Parliament together with instructions and recommendations to schools and local education authorities. With growth through industrialisation the need for a more educated workforce increased and from the late 19th century the state became more involved in education. Acting on the recommendations of the 1987 Black Report, the British government brought in the 1988 Education Act (Baker Act). Parents became 'customers' and pupils became both clients and 'products'. What is especially important about this act is that it involved increased state control, not over the form of education but also of its content. This act was supported by the New Right (Conservatives), influenced by their functionalist perspective, the main aims of the act were: 1. To match education more closely to economic need through a host of policies which collectively were New Vocationalism , as well as introducing mandatory work experience along with the creation of Vocational qualification such as the NVQ and GNVQ. 2. Raise the standards of education in the UK by applying ?free market? principles. With the new right thinking heavily influenced by their faith in free market principles, the laws of supply and demand were introduced through ?Marketistaion? , which they argued would lead to competition between providers (schools) and was seen as the most efficient and rational way of encouraging quality and value for money, even though these principles successfully applied to the business world the Conservatives saw no reason why it could not be applied to public services such as healthcare or education. The Key Market principles would be delivered through efficiency, quality and competition. The principles: 1. Increase competition between education suppliers. 2. Give customers product choice. 3. Regulate the product. 4. 'Bad' product will be eliminated by the market. ...read more.

This then helps schools achieve higher in their exam results and improving the popularity but in an unpopular school this is hard because they have more cases suitable for treatment and hopeless cases than in a popular school but in the same instance they have less funding to put into those pupils meaning they can't achieve as high. Geoffrey Walford's (1991) research on city technology collages (CTCs) found that even though they intended to provide vocational education in partnership with employers and to recruit pupils from all social backgrounds, in practice they became just another route to elite education. Middle class parents became attracted to them because they were seen as the next best thing to traditional grammar school. Similarly John Fitz?s (1997) study of grant maintained schools which were allowed to opt out of local authority education control, found them reinventing tradition and concluded that the reason most schools adopt a traditional image is to attract middle class parents. Stephen Ball et al (1994) found schools had to spend more marketing themselves to parents often at the expense of spending on special needs or other areas. Overall evidence suggests that marketisation and selection processes have invented a polarised education system, where on one extreme we have the popular, successful, well resourced school with an able largely middle class intake and the unpopular, failing, under resourced schools with mainly working class low achieving pupils at the other. Sheila Macrae (1997) found a similar pattern in post-16 education. At the top are highly selective sixth form colleges attracting middle class students and providing academic courses leading to university and professional careers. Then come general further education colleges catering for mainly working class students and offering largely vocational courses and at the bottom are the government funded training organisations offering low level courses leading to low income jobs. The national curriculum has also been criticised as being a key factor in educational achievement among different ethnic groups. ...read more.

Some Academies have failed to improve on the results of the Schools which they have replaced and one Academy has failed its OFSTED inspection. In relation to this final point it is no easy task to assess the examination performance of the operational academies. Bearing in mind that they are located in areas of deprivation, they take disproportionate numbers of pupils eligible for free school meals and they have sometimes replaced schools which were achieving relatively poor results, it should not come as a surprise that several Academies are achieving results significantly below the national average. However there is some evidence that in some Academies results are improving at a faster rate than nationally and that even where there is little improvement it may be reasonably argued that the Academies have not yet had enough time to generate significant improvements. Reports from OFSTED and the Price Waterhouse Evaluation cautiously suggest that there is some evidence of improvement but that the Academies programme has not been in operation long enough for a full assessment to be made. Meanwhile former Labour Secretary of State Ruth Kelly did argue that the apparent success of the rather similar City Technology Colleges originally introduced by the Conservatives suggests that the Academies programme is working and that it has been necessary to press ahead with the Academies programme to improve the educational opportunities of disadvantaged pupils and that other school buildings are also being improved via funding from the School Building programme. The Academies programme was a rather ambitious initiative which formed a major part of Labour?s attempts within its education policy, to tackle disadvantage and raise attainment. The programme relied partly on the private sector being in partnership with the state, another key theme in New Labour policy-making. The scheme was deemed successful enough to continue and indeed to accelerate its expansion towards a target of at least 400 Academies. However, there have been various criticisms of the programme, especially concerning the role of the sponsor and a potential democratic deficit arising from a lack of local authority involvement. ...read more.