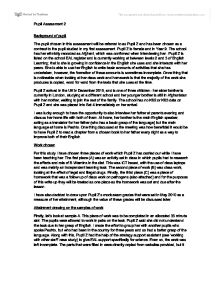 Pupil Assessment - Pupil Z is female and in Year 9. The school has her ethnicity recorded as Afghani, which was confirmed when interviewing her. Pupil Z is listed on the school EAL register and is currently working at between levels 2 and 3 of English Le

Background of pupil The pupil chosen in this assessment will be referred to as Pupil Z and has been chosen as a contrast to the pupil studied in my first assessment. Pupil Z is female and in Year 9. The school has her ethnicity recorded as Afghani, which was confirmed when interviewing her. Pupil Z is listed on the school EAL register and is currently working at between levels 2 and 3 of English Learning; that is she is growing in confidence in the English she uses and she interacts with her peers. She is able to use her English to write basic accounts of activities that she has undertaken, however, the formation of these accounts is sometimes incomplete. Once thing that is noticeable when looking at her class work and homework is that the majority of the work she produces is copied, word for word from the texts that she uses at the time. Pupil Z arrived in the UK in December 2010, and is one of three children- her elder brother is currently in London, studying at a different school and her younger brother is still in Afghanistan with her mother, waiting to join the rest of the family. ...read more.

Pupil Z said she did not understand the task due to her grasp of English. I made the effort to group her with another pupils who spoke Pashto, but who had been in the country for three years and so had a better grasp of the language. Along with this, Pupil Z had the help of the strategy support assistant (see 'working with other staff' case study) to give EAL support specifically for science. Even so, the work was left incomplete. The parts that were filled in were directly copied from websites provided, but it did show that Z has the ability to work independently with some guidance. Pupil Z was given the target to complete work in class and if unable to, to complete at home. Sample B was a piece of work in which the pupils were given 15 minutes in groups to place drugs into three columns; one column naming the drug, one describing the effect and one giving an example, using their knowledge of drugs from earlier in the lesson. Text books were also available. Although the learning objectives and some keywords were taken down, Pupils Z also though of her own keywords which she added (after looking at the text). ...read more.

Teachers can personalise their reports but many have said they find this time consuming and prefer the automated version. The following report is personalised as a report that I would use to inform on Pupil Z's attainment. Eastlea Community Subject Report: Science Pupil Name: Pupil Z Pupil Z shows a basic understanding of the scientific ideas which she is taught and is able to explain these verbally when asked. Pupil Z is struggling with her written work especially when asked to write in her own words. Her reading is also an issue which I have brought up with the EAL coordinator and she will hopefully be provided with extra support after school. Her behavior in classes is excellent although she can sometimes drift away from what is being taught in the lesson. In her recent mock GCSE examination, Z was graded at a U grade, which is ungraded. I believe she is capable of more and including her class work I believe Z to be working at an E grade level. I think that Z can achieve this grade but needs to work on her English and also needs to complete work which is not finished in class, and ensure that all of her home work is completed on time. CURRENT GRADE: U PREDICTED GRADE: E ?? ?? ?? ?? Pupil Assessment 2 ...read more.