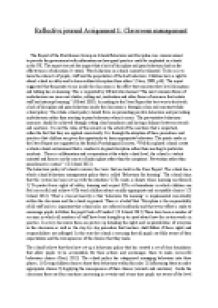 ﻿Reflective journal Assignment 1: Classroom management The Report of the Practitioners Group on School Behaviour and Discipline was commissioned to provide the government with information on how good practice could be implanted in schools in the UK. The report stressed the impact that a lack of discipline and poor behaviour had on the effectiveness of education. It stated, ?Poor behaviour in schools cannot be tolerated. To do so is to harm the interests of pupils, staff and the perpetrators of the bad behaviour. Children have a right to attend school in safety and to learn without disruption from others? (Steer, 2009, p16). The report suggested that the greatest issue inside the classroom is the effect that consistent low level disruption and talking has on learning. This is supported by Ofsted who claimed ?The most common forms of misbehaviour are incessant chatter, calling out, inattention and other forms of nuisance that irritate staff and interrupt learning.? (Ofsted 2005). According to the Steer Report the best way to deal with a lack of discipline and poor behaviour inside the classroom is through a clear and constant whole school policy. The whole school policy should focus on promoting positive behaviour and preventing misbehaviour rather than reacting to poor behaviour when it occurs. The preventative behaviour measures should be achieved through setting clear boundaries and having a balance between rewards and sanctions. It is not the value of the rewards or the extent of the sanctions that is important, rather the fact that they are applied consistently. ...read more.

There is little accountability for the poor choices that they continually choose to make. From observing other teachers I have found that it is difficult having total consistency across the school in implementing sanctions. Whether or not a pupil has infringed on the rights and responsibilities of the classroom is down to the interpretation of the teacher. What may be a warning in one classroom may only be a quiet word in another. I have found it difficult finding the correct level in my own classroom due to this level of ambiguity. The school encourages staff to use praise as often as possible and have set up a system in which teachers are to send home positive postcards. In this way the school ?communicates with parents and provides regular feedback on the progress being made? (Steer, 2009, p16). I also use praise to positively reinforce behaviours that are key to a successful learning environment. This theory of positive reinforcement is supported by Skinner who suggests that ?a person who exhibits a desired behaviour should instantly receive a reward for that behaviour to induce a repetition? (Grove, 2009, p151). I ensure that I verbally praise pupils when I see positive behaviour particularly at difficult times in the lesson e.g. the first three minutes and times of transition. I feel this has had a profound impact on the entrance into my classroom. I have praised pupils who enter, sit down in silence and are ready to work. ...read more.

I differentiated and scaffolded the work so that all pupils were able to gain an understanding of what they were doing before pushing on independently. I have noticed an evident change in behaviour from earlier weeks, pupil now being more engaged in the content since I have started planning in this way. I feel that building strong relationships with pupils is an effective behaviour management strategy. I have done this through ensuring that I knew all the pupils as soon as possible and by learning something personal about them all. On entrance into the classroom I say hello to them all and try to ask about things that are going on in their lives. I treat them with the respect that I expect to receive from them and always assume that they are going to show me their best. When a pupil has infringed one of the classrooms rights and responsibilities I do not shout, telling them that they have made a choice to behave in that way and hence they have chosen a warning, always drawing the sanctions back to the behaviour for learning policy. I remain calm when I say this, ensuring that I show no anger or emotion as I believe that this may give heat to a potential confrontation. I feel this is important and I don?t want to seem that I am judging the student. I believe that in behaving in this way I create a positive atmosphere in the classroom that is conducive to learning. ...read more.