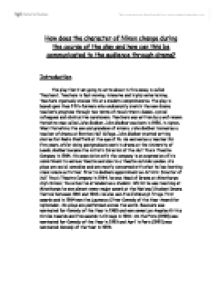 Teachers - How does the character of Nixon change during the course of the play and how can this be communicated to the audience through drama?

How does the character of Nixon change during the course of the play and how can this be communicated to the audience through drama? Introduction The play that I am going to write about in this essay is called 'Teachers'. Teechers is fast moving, intensive and highly entertaining. Teechers vigorously evokes life at a modern comprehensive. The play is based upon thee fifth-formers who exuberantly sketch the new drama teacher's progress through two terms of recalcitrant classes, cynical colleagues and obstructive caretakers. Teechers was written by a well-known Yorkshire man called John Godber. John Godber was born is 1956, in Upton, West Yorkshire; the son and grandson of miners. John Godber trained as a teacher of drama at Bretton Hall College. John Godber started writing stories for Radio Sheffield at the age of 16. He worked as a teacher for five years, whilst doing postgraduate work in drama at the University of Leeds. Godber became the Artistic Director of the Hull Truck Theatre Company in 1984. His association with the company is an expression of his commitment to serious theatre and also to a theatre outside London. His plays are social comedies and are mostly concerned with what he has 'working class leisure activities'. Prior to Godbers appointment as Artistic Director of Hull Truck Theatre Company in 1984, he was Head of Drama at Minsthorpe High School, the school he attended as a student. Whilst he was teaching at Minsthorpe he won almost every major award at the National Student Drama Festival between 1981 and 1983. He also won five Edinburgh Fringe First awards and in 1984 won the Laurence Oliver Comedy of the Year Award for Up'nUnder. His plays are performed across the world. Bouncers was nominated for Comedy of the Year in 1985 and won seven Los Angeles Critics Circles Awards and five awards in Chicago in 1987. On the Piste (1990) ...read more.

"Hit em low and hard . . . low and hard, kids respect discipline. Basford and Nixon do not see eye to eye about how the pupils at Whitewall Comprehensive should be treated. Basford is also Jealous of Nixon because of his role in Mikado. It is at this point in the play that Nixon begins to feel unsettled. Nixon is unsettled after his visit to Saint Georges School because Nixon sees that Saint Georges has a drama studio and dancing facilities. This makes Nixon feel unsettled because Nixon fells that Saint Georges is a better school than Whitewall because it has better facilities. Whitewall Comprehensive didn't have this. Nixon says "it was fantastic, there was something moving about Saint Georges that made you want to teach there. Something soothing and academic, the same, I was beginning to think, could not be said for Whitewall". Nixon is unsettled after his encounter with Doug. Doug is the typical school caretaker who likes which suits this play very well. This is because he likes to have everything done on time; he likes to have everything to be up to his standard and thinks that he is never wrong. Because of this characters personality he suits the scenes he's in during the play very well. Nixon is unsettled because Nixon feels that he does not belong in the school. This is because Doug won't let Nixon use the school hall for a bit longer for Drama after school. This is because Doug doesn't believe in drama. Doug says, "Well it's not worth bloody doing", then Doug also says "If you ask me they should take it off, the bloody timetable, I mean, they don't do any writing make as much noise as they bloody like, waste of Education Authority's bloody money if you ask me". This makes Nixon unsettled at Whitewall Comprehensive because he sees how he the other staff thinks of him. ...read more.

This part of the text reflects the statement above 'Nixon has developed a violent side to his personality'. We know this because Nixon says that you can 'Throw It', referring to the brick after he is asked by Gail "What can you do with a brick?" We also know that Nixon has developed a violent side to his personality because Gail says, "That shows the violent side of you", but when Nixon first joined Whitewall Comprehensive as Drama teacher he didn't have a violent side to his personality, but his has now adapted to the teaching methods at Whitewall Comprehensive in order to be able to control the pupils. Nixon has realised that Basford is throwing persistent criticisms at him. This means that Nixon attitude towards Basford has changed. Nixon doesn't speak to Basford politely anymore as he did at the beginning of the play, we can see during and throughout Act Two. An example of this is when Basford says to Nixon "Quiet. Keep them quiet. I said keep the noise down". Nixon then replies to Basford by saying "Hang on, Mr Basford, I wouldn't do that to you". This shows us that Nixon isn't bothered that Basford is complaining about the noise level of Nixon's class. Nixon copes with Basford's criticisms by throwing them all back at Basford. We know this when Basford says to Nixon "Enjoying themselves?" "They sound like they're trying to get out of your lesson, they can't stand it". Nixon then replies to Basford by saying "I'm sure that there's more sixth formers screaming to get out of yours". Referring to the lesson. What Basford says to Nixon is just one of Basford's many criticisms towards Nixon. But Nixon has realised that he ha to change and give it back to Basford otherwise he will get nowhere. He replies by throwing the criticism back to Basford but changing it round to reflect on Basford. Basford is 'Pissed off' with Nixon because Nixon got an interview at St Georges. When Mr Basford went and applied for a job at St Georges he never had his references taken up. ...read more.