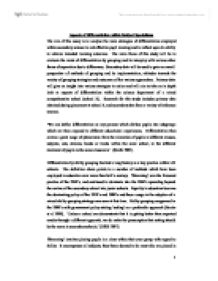 Aspects of Differentiation within Subject Specialisms The aim of this essay is to analyse the main strategies of differentiation employed within secondary science to aid effective pupil learning and to reflect upon its ability to achieve intended learning outcomes. The main focus of this study will be to evaluate the mode of differentiation by grouping and its interplay with various other forms of separation due to differences. Secondary data will be used to gain an overall perspective of methods of grouping and its implementation, attitudes towards the variety of grouping strategies and outcomes of the various approaches. Primary data will give an insight into various strategies in action and will aim to take an in depth look at aspects of differentiation within the science department of a mixed comprehensive school (school X). Research for this study includes primary data obtained during placement at school X, and secondary data from a variety of reference sources. 'We can define differentiation as any process which divides pupils into subgroups which are then exposed to different educational experiences. Differentiation then covers a great range of phenomena from the allocation of pupils to different classes, subjects, sets, streams, bands or tracks within the same school, to the different treatment of pupils in the same classroom.' (Smith 1981). Differentiation by ability grouping has had a long history as a key practice within UK schools. The definition above points to a number of methods which have been employed in education over more than half a century. 'Streaming' was the favoured practice of the 1950's, and continued to dominate into the 1960's spreading beyond the realms of the secondary school into junior schools. Equality in education became the dominating policy of the 1970's and 1980's and thus a surge in the adoption of a mixed-ability grouping strategy was seen at this time. Ability grouping reappeared in the 1990's with government policy stating 'setting' as a preferable approach (Boaler et al 2000). ...read more.

There appears to be the risk of considerable problems with both mixed-ability grouping and setting. The DfEE's concerns that mixed-ability grouping was failing to address the needs of every child (Boaler et al 2000) would not be misplaced if also attributed to setting. Certain areas in both methods of grouping need addressing to ensure optimum success. The Key Stage 3 National Strategy 2002 highlights factors which may encourage greater success for setting they include, 'close teamwork, cooperative planning and careful monitoring by science staff to make sure that pupils can move from set to set as their progress demands and that expectations for all pupils are suitably high' (www.standards.dfes.gov.uk). It may be pointed out that to address the needs of every child a more individualistic approach may be required whatever the adopted grouping strategy (Postlethwaite 1993). Ireson et al 2002 also points to this fact and stresses that, 'Teachers may need to be reminded that sets are not homogenous'. Thus in addition to differentiation by grouping other forms of differentiation with a more in depth regard for the individual must take place. If it is to be taken into account that even in a setting environment groups 'are not homogenous' (Ireson et al 2002) then consideration as to whether or not a pupil may need to be given a separate task or if a different outcome needs to be expected should be taken into account. This problem was highlighted by OFSTED, 'secondary schools need to give attention to matching work more effectively to the knowledge and skills of pupils of different abilities' (OFSTED 1993). 'Differentiation by task involves students within the same classroom either receiving different tasks or using different routes to complete the same task' (Hall 1997). This strategy was observed in practice at school X, separate worksheets were used to provide the same learning outcome for all pupils and were mainly used as an aid to pupils of lower ability, those with literacy problems or those who were struggling to keep up with the pace of work of the rest of the class. ...read more.

Pupils within set 1 gave a high priority to practical and computer work, those in set 3 also favoured practicals but also placed poster creation as a preferable activity, set 5 had slightly different preferences moving away from practical work to select posters, videos and computer work (Appendix 9a-c). The results indicate a high priority for kinaesthetic and visual tasks rather than linguistic activities. However the survey is but a brief snapshot to give an indication of the variety of learning styles which can be found within any one year group. The investigation has taken into consideration a number of methods of differentiation namely grouping, task setting and learning styles. With regard to grouping, extensive discussion and evaluation of the research available fails to appropriate a clear preferable technique of group organisation. The general consensus from the point of view of teachers is that setting provides a preferable environment to achieve learning goals (Hallam et al 2003). This is however purely based upon what is perceived as a more congenial teaching situation and fails to take into account other issues raised such as the creation of low self-esteem for low ability pupils and anxiety for high achieving students (Boaler 1997). Differentiation by task setting appeared successful within the confines of limited practical research secondary studies viewed this method with a greater air of caution gathering worrying findings as to the effects on low ability pupils (Hall 1997). Focusing on individual differences with regard to learning style appears to attract considerable praise and seems to be a method that can only enhance the quality of education within the classroom although it may have its limitations within the stringent framework of the national curriculum. In overview differentiation is summed eloquently by Turner and DiMarco (1998:110), 'Adopting a differentiated approach to teaching is a matter of being on the lookout for opportunities to guide, encourage and support your pupils in as many ways as possible, using whatever resources, processes and tactics seem appropriate. ...read more.