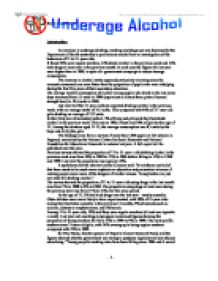 Introduction An increase in underage drinking, smoking and drugs use was disclosed by the Department of Health yesterday in preliminary results from an investigation of the behaviour of 11 to 15-year-olds. It found 10% were regular smokers, 24% drank alcohol in the previous week and 14% took drugs at least once in the previous month. In each case the figures for last year were higher than in 1999, in spite of a government campaign to reduce teenage consumption. The increase in alcohol intake appeared particularly alarming since the amounts consumed rose even faster than the proportion of pupils who were indulging during the first five years of their secondary education. The average weekly consumption of alcohol among pupils who drank in the last seven days increased from 5.3 units in 1990 (equivalent to almost three pints of normal strength beer) to 10.4 units in 2000. Just over half the 15-year-old boys reported drinking alcohol in the previous week, with an average intake of 14.5 units. This compared with 46% of 15- year-old girls drinking an average of 11.2 units. In their first year of secondary school, 5% of boys and girls said they had drunk alcohol in the previous week. This rose to 18% of boys and 19% of girls by the age of 13. Among the drinkers aged 11-13, the average consumption was 8.3 units by the boys and 4.6 by the girls. ...read more.

"We are concerned by the small increase in the percentage of young people who have used drugs in the last month and in the last year. However we are encouraged that the percentage of pupils reporting use of heroin and cocaine -the drugs which cause the greatest harm - has remained low." On the rise in teenage drinking, she said: "We look forward to the publication of the main report which will provide more detailed information on the young people's drinking behaviour, and we will continue to monitor trends." A separate report on teenage drinking published by the Scottish executive found a rise in drinking among 12 to15-year-olds in the period 1998-2000. � Thirty-nine young people died in 1999 after sniffing butane lighter refills, according to a report on UK deaths from volatile substance abuse by St George's hospital medical school in London. Deaths due to gases, aerosols, glues and similar substances declined steadily over the past 10 years, but still account for one in 60 deaths among teenagers between 15 and 19. Is Your Teenager Using? The changes that you've noticed in your teenager may just be signs of growing up, but some can be dead giveaways for alcohol and drug use. Continued alcohol and drug use will affect your child's behaviour, attitudes and even choice of friends. If your child is using alcohol and drugs, it's a good bet he (or she) ...read more.

Or have you noticed any slurred speech? Changes in the pupils of his eyes, or redness or bloodshot eyes? Conclusion: A Better Way Instead of stigmatizing alcohol and trying to scare people into abstinence, we need to recognize that it is not alcohol itself but rather the abuse of alcohol that is the problem. Teaching about responsible use does not require student consumption of alcohol any more than teaching them world geography requires them to visit Nepal, or teaching them civics requires that they run for office or vote in presidential elections. We teach students civics to prepare them for the day when they can vote and assume other civic responsibilities if they choose to do so. Because either drinking in moderation or abstaining should both be equally acceptable options for adults, we must prepare students for either choice. To do otherwise is both irresponsible and ineffective, if not counterproductive. A recent study of the effectiveness of alcohol education programs compared those that present an abstinence-only message with those that present drinking in moderation as an option. It is clear that programs accepting responsible use are demonstrably more successful than are no-use-only programs.29 In spite of noble intentions and the expenditure of massive amounts of time, energy, and money the best evidence shows that our current abstinence-oriented alcohol education is ineffective. Simply doing more of what is not working will not lead to success; it is essential that we re-think our approach to the problem. Our youth are too important and the stakes are too high to so otherwise. Rania Abou Samra - 1 - ...read more.