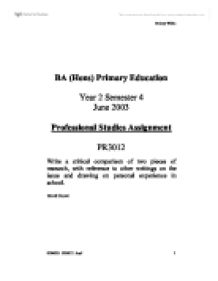 Write a critical comparison of two pieces of research, with reference to other writings on the issue and drawing on personal experience in school.

BA (Hons) Primary Education Year 2 Semester 4 June 2003 Professional Studies Assignment PR3012 Write a critical comparison of two pieces of research, with reference to other writings on the issue and drawing on personal experience in school. Word Count: Fenema, E. Peterson, P. L. Carpenter, T. P. & Lubinski, C. A. (1990) Teachers' Attributions and Beliefs About Girls, Boys and Mathematics Educational Studies in Mathematics Vol. 21 pp. 55-69 Tiedemann, J. (2000) Gender-Related Beliefs of Teachers in Elementary School Mathematics Educational Studies in Mathematics Vol. 43 pp. 191-207 Rationale When choosing the two pieces of research to compare, I sought a topic that interested and was of relevance to me. According to Hammersley and Scarth (1993) the function of educational research is to inform policy-makers and practitioners and consequently to improve education (p.216). Subsequently the aim of this essay is not only to draw a critical comparison between the two pieces of research, but also to inform me, as a student teacher, on the findings of the role of teachers' beliefs of gender in mathematics and so advise my future practice. In my last SE placement I found myself teaching a mixed year class of which boys made up two thirds of the pupils, this highlighted to me some of the gender issues that can manifest themselves in the primary classroom, I had previously not had experience of. The school had a policy on gender, which contained strategies for raising the achievement and interest of boys in lessons, particularly in literacy. When observing the male teacher conducting literacy and history lessons I found that many of the texts were tailored to the boys' interests, such as information texts on robots or science fiction. In other classes I observed taught by female teachers, I did not see the use of any resources specifically targeted at boys. I found that because the class contained more boys than girls and had a male teacher, much of the talk and topics had a male theme. ...read more.

to make a hypothesis of what he expects to find in relation to teachers attributions and beliefs. Bell (1999) identifies that it is useful to make statements about relations between variables as it provides a guide to the researcher as to how the original idea may be tested and they can attempt to find out whether it is so among the subjects in the sample (p.25). Cohen & Manion (1994) agree that hypotheses and concepts play a crucial part in the scientific method, also known as positivism, defined as all genuine knowledge is based on sense experience and can only be advanced by means of observation or experiment. Positivism, however, has been challenged from many quarters (p.11), Cohen & Manion (1994) quote Kierkegaard's (1974) theory of existentialism saying that people should be freed from objectivity and having to discover general laws to explain human behaviour, but instead consider ones' own relationship to the focus of the enquiry, which is the capacity for subjectivity (p.23). Tiedemann (2000) states an underlying assumption of his study, that there is no difference in gender achievements or teacher beliefs in mathematics. Cohen & Manion (1994) criticise embarking on a study having pre-interpreted the world to be researched as the assumptions of the researcher can influence upon the results (p.25). Methods Both Fenema et al (1990) and Tiedemann (2000) used questionnaires to gather data. Fenema et al (1990) used two types of questionnaires, one being a structured individual interview the other a non-direct questionnaire, in their research. Denscomb (1998) states that a structured interview, which involves tight control over the format of the questions and answers, is similar to a questionnaire that is administered face to face. He adds that structured interviews lend themselves to the collection of quantitative data, which was the type of data Fenema et al (1990) did gather. There are issues to consider when deciding to conduct a questionnaire directly. ...read more.

The researchers did not study children of the same age, in fact the children in Fenema et al's (1990) research were 3 to 4 years younger than in Tiedemann's (2000). The research was conducted in differing countries and Fenema et al's (1990) sample size (pupils) was double that of Tiedemann's (2000). Denscomb (1998) reflects on issues when using a sample of 300 or less (Tiedemann's (2000) being 312). He states that extra attention needs to be paid to the issue of how representative the sample is and caution is needed about the extent to which generalisations can be made on the basis of the research findings (p.24). Does this mean therefore that Tiedemann's results are less viable than Fenema et al's (1990) due to his sample size? This would have to be investigated in relation to how representative his sample was. Fenema et al (1990) may have a larger sample but there is no information on how representative it is. Denscombe (1998) also states the smaller the sample the simpler the analysis should be, in the sense that the data should be subjected to fewer subdivisions (p.24). Tiedemann however divides his questionnaire in 6 categories containing 21 items; according to Denscomb (1998) this can 'dilute' results (p.24). The issues of bias and validity in terms of Fenema et al's (1990) interview should also be taken into account. As previously discussed these issues can affect results and more information on how the interview was conducted is needed before an analysis of its reliability can be conducted. To close, it is difficult to draw clear and unequivocal conclusions from both these sets of research, although Fenema et al's (1990) study follows more of the advice for gaining reliable results, such as more than one method of data collection and a large enough sample size. Bell (1999) states that in the analysis, interpretation and presentation of data, care has to be taken not to claim more for results than is warranted. Li (2001) states that when studying all the literature, including both the research papers analysed here, on gender-related beliefs in teachers, the results are inconclusive. ...read more.