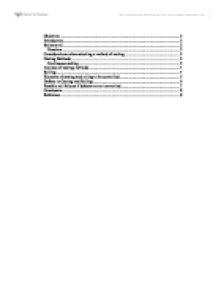 A suitable manufacturing process and route for producing rail. The report will also describe the critical elements of casting and rolling which need to be controlled

Objective 2 Introduction 2 Railway rail 2 Function. 2 Considerations when selecting a method of casting 3 Casting Methods 3 Continuous casting 3 Analysis of casting methods 4 Rolling 4 Elements of casting and rolling to be controlled 5 Defects in Casting and Rolling 6 Possible rail failures if defects are not controlled 7 Conclusion 8 Reference 9 Objective The aim of this assignment is to describe a suitable manufacturing process and route for producing rail. The report will also describe the critical elements of casting and rolling which need to be controlled in order to optimize the mechanical properties of rail. The typical defects which might be found if the casting and rolling processes are not adequately controlled will be outlined as well as the potential rail failures which might be encountered if rolling and casting defects are left uncontrolled. Introduction The way in which a product is made has a big effect on the quality of the product. The demands on rail quality are high because of the condition of use and functions. It is vitally important therefore that the correct manufacturing processes are chosen at the design stage so that your design doesn't have to be changed later. Obviously in industry, the aim is to produce a design which requires as little change as possible when being made, because change costs time, and time cost money. ...read more.

The length of rail and the demand for consistent as well as surface finishing makes continuous casting the most suitable means. Rolling The next phase in producing rail is Rolling. Rolling is the main method used to shape steel into different products after it has been cast. There are two types of rolling - hot and cold. The rolling process for both hot and cold consists of passing the steel between two rolls revolving at the same speed but in opposite directions. The gap between the rolls is smaller than the steel being rolled, so that the steel is reduced in thickness and at the same time lengthened. One set of rollers is called a stand, and in any one mill there can be a number of stands. One length of steel can pass through a stand a number of times so that it is gradually reduced in size and progressively rolled to the desired shape. A slab 230mm thick can end up only 1.5mm thick, but many times longer, after the hot rolling process. Cast steel is a relatively weak mass of coarse, uneven metal crystals, or 'grains'. Rolling causes this coarse grain structure to re-crystallize into a much finer grain structure, giving greater toughness, shock resistance and tensile (stress) ...read more.

link to cause the fracture of the whole component Fatigue is the progressive, localized, and permanent structural damage that occurs when a material is subjected to cyclic or fluctuating strains at nominal stresses that have maximum values less than (often much less than) the static yield strength of the material. The resulting stress may be below the ultimate tensile stress, or even the yield stress of the material, yet still cause catastrophic failure. Ductility The amount of inelastic deformation before failure, often expressed relative to the amount of elastic deformation. Material ductility can be measured by the amount of inelastic strain before failure compared to the amount of elastic strain. It is commonly expressed as a ratio of the maximum strain at failure divided by the yield strain. Conclusion Continuous casting offer considerable energy savings, less scrap produced which means improved yield, improved labour productivity, improved quality of steel, reduced pollution reduced capital costs, increased use of purchased scrap when output is maximized. These benefits offer by continuous casting makes it the best way to produce rail. Reference 1 Campbell, John. Castings. Publisher: Elsevier Butterworth-Heinemann 2 Hodgson WH. Residual stresses in rail. In: Kalker JJ, et al., editors. Rail quality and maintenance for modern railway operation. Dordrecht, The Netherlands: Kluwer Academic 3 http://en.wikipedia.org 4 http://encarta.msn.com 5 http://home.att.net/~africantech 6 www.ucs.louisiana.edu 7 http://urban.arch.virginia.edu 8 https://www.rcnde.ac.uk ?? ?? ?? ?? producing rail 9 ...read more.