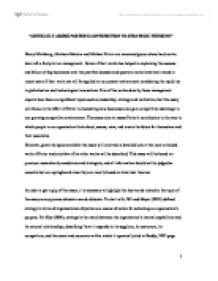 "CRITICALLY ASSESS PORTER'S CONTRIBUTION TO STRATEGIC THINKING" Henry Mintzberg, Abraham Maslow and Michael Porter are renowned gurus whose hard works have left a footprint on management. Some of their works has helped in explaining the success and failure of big businesses over the past few decades and question marks have been raised in recent years if their work can still be applied to our present environment considering the rapid rise in globalisation and technological innovations. Few of the works done by these management experts have been on significant topics such as leadership, strategy and motivation, but this essay will focus on the effort of Porter in elucidating how businesses can gain competitive advantage in our growing competitive environment. The essay aims to assess Porter's contribution to the way in which people in an organization think about, assess, view, and create the future for themselves and their associates. However, given the space available the essay will only take a detailed look at the most criticised work of Porter and only few of his other works will be described. This essay will be based on previous researches by academics and strategists, and all information should not be judged as accurate but as a springboard since they are mostly based on historical theories. In order to get a grip of the essay; it is necessary to highlight the key words related to the topic of the essay as any precise delusion can de delusive. ...read more.

RBV, which has received the highest number of plaudit since the evolution of Porter's work was first spotted in Wernerfelt's article in 1984 before further development by Rumelt 1984, Barney (1986a; 1986b; 1988; 1991) (power point). RBV explains how a company's resources drive its performance in a dynamic competitive environment (David J. Collis et al, 1995, pg 118-128). The idea behind the development of RBV is to state the importance of resources to gaining competitive advantage over rivals where resources are heterogeneous in nature. In clarifying the prerequisite of resources Barney (1991) explained that a firm resource must be valuable, rare, and imperfectly imitable and substitutable in order to be source of a sustained competitive advantage (cited in Henderson and Mitchell, 1997). However, both frameworks have received appraisals but conflicting assumptions have been made by both theories which further developed more theoretical views. Porter 1980 assumes that understanding the external environment and decision making (or "moves") according to the five forces is the primary role of strategy, thus opposing the argument of Barney 1986a who argued that analyzing internal skills and capabilities produces more accurate information on the potential value of strategic resources than does environmental analysis (www2). Barney's argument wasn't wholly accepted by Priem and Butler (2001 a & b) but argued that Barney's (1991) statement "if a resource is valuable and rare, then it can be source of competitive advantage" is necessarily true if the concepts 'valuable' and 'competitive advantage' are defined in the same terms (cited in Henderson and Mitchell, 1997). ...read more.

RBV claimed that the key to sustaining competitive advantage is to have resources which are valuable, rare, imperfectly imitable and substitutable. Briem and Butler debated this approach where they said it is the way the concept are defined that determines if it is a source of competitive advantage. Other strategists were not left in the cold and they voiced out their criticisms of Porter's work. D'Aveni stated that there is no sustainable competitive advantage and market structures are dynamic. Downes claimed that three new forces namely digitalization, globalization and deregulation should be taken into context has the main driver for change today is technology and not just the forces mentioned by Porter. Lastly, Hamel in his article explained that companies can either be a rule taker, maker or breaker. In order to give a valid conclusion to the essay, it is important to reconsider the definition made by Kay (1996) where strategy definition was given has the match between the organisation's internal capabilities and its external relationships. It would be correct to state that a successful strategy will take both the internal and external environment into consideration when developing its strategy. It is obvious that neither the five forces analysis nor the RBV has done so in this case; none of the theories can be considered capable of achieving competitive advantage but will only be valuable if both approaches are combined. Based on the level of knowledge of this essay it would be interesting to see a strategist which will develop a strategy that will link the internal resources with the external environment. ...read more.