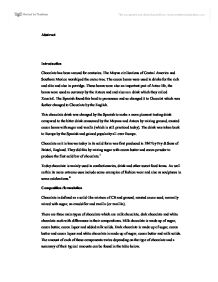 The Manufacturing Process of Chocolate and Final Product Analysis.

Abstract Introduction Chocolate has been around for centuries. The Mayan civilisations of Central America and Southern Mexico worshiped the cacao tree. The cocoa beans were used in drinks for the rich and elite and also in porridge. These beans were also an important part of Aztec life, the beans were used as currency by the Aztecs and and also as a drink which they called Xocolatl. The Spanish found this hard to pronounce and so changed it to Chocolat which was further changed to Chocolate by the English. This chocolate drink was changed by the Spanish to make a more pleasant tasting drink compared to the bitter drink consumed by the Mayans and Aztecs by mixing ground, roasted cocoa beans with sugar and vanilla (which is still practiced today). The drink was taken back to Europe by the Spanish and gained popularity all over Europe. Chocolate as it is known today in its solid form was first produced in 1847 by Fry & Sons of Bristol, England. They did this by mixing sugar with cocoa butter and cocoa powder to produce the first solid bar of chocolate.i Today chocolate is mainly used in confectionaries, drink and other sweet food items. As well as this its more extreme uses include some examples of fashion wear and also as sculptures in some celebrations.ii Composition /formulation Chocolate is ...read more.

At the beginning of the process the flavour is concentrated on the surface of the cocoa particles and in the fat while the sugar has none of the flavour. By the end of the process the flavour is transferred to the sugar giving a near uniform distribution of flavour of these components as can be seen in diagram. Other changes seen in the conching machines are the removal of acid which is reduced when excess moisture is removed. This change is at its biggest near the beginning of the process and decreases over time as can be seen in diagram. Moulding The shaping of chocolate is done using moulds. This can include solid bars, hollow chocolates (like easter eggs) and chocolates filled with other ingredients. The moulding process starts with the tempered chocolate being deposited into a mould with a mirror image of the desired design. The moulds are shaken to evenly distribute the chocolate and to remove air pockets which would cause the chocolate to have holes. The mould can also be scraped to remove any excess chocolate before it enters the cooling area. Once the chocolate is sufficiently cooled it can be removed from the mould by inverting it and either tapping or twisting the moulding depending on the material that the mould is made from. ...read more.