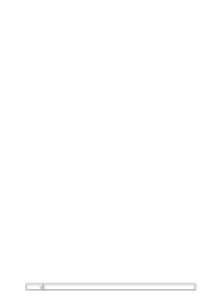 ﻿________________ Mechanical Engineering Science 5 ? Dynamics Lab Report Trifilar Suspension Abstract By using the trifilar suspension set up it is possible to calculate the moment of inertia of rigid bodies. By completing the experiment and acquiring actual data results these can then be compared to the theoretical values calculated to show the difference. Introduction ?The Mass Moment of Inertia of a solid measures the solid's ability to resist changes in rotational speed about a specific axis, the larger the Mass Moment of Inertia the smaller the angular acceleration about that axis for a given torque. The mass moment of inertia depends on a reference axis, and is usually specified with two subscripts. This helps to provide clarity during three-dimensional motion where rotation can occur about multiple axes.? [1] ?The actual trifilar suspension is an assembly that is used to determine the moment of inertia of a body about an axis passing through the body?s mass centre, perpendicular to the plane of motion?[2] Image shows trifilar suspension set up: [image taken from http://www.tpub.com/content/MIL-SPEC/MIL-S/MIL-S-81963B/MIL-S-81963B00038.htm] Occurrence in Industry The type of motion looked at in this experiment can be seen in many areas of engineering, making it important to understand the components involved in simple harmonic motion so as to be able to design products accordingly, the following are just a few examples of where the theory is used. Car Suspensions: As the suspension of car moves up and down in the y axis as time progresses the content of the experiment relates closely to working of suspension making it easier to design successful systems. ...read more.

Hanger holding suspension chains The Suspension was set up as shown in the diagrams below: Suspension plate that objects will rest on Chains connect suspension plate to hanger The diagram below shows the set up of the objects on the suspension plate when the objects are offset from the centre of the platform, which will be the first set up for the experiment Cylinder Square section Tube Circular Platform This diagram shows the plate with objects concentric to the platform which will be the second set up for the experiment Tube Circular Platform Square section Cylinder The third set up for the experiment will simply be the platform on its own with no objects. Experiment Data Density of mild steel, 7,800kg /m3 Table taken from http://vision.hw.ac.uk/courses/1/B58EC_2011-2012 Length, L, of chains (m) that attach the platform to the hanger (All chains should be equal in length, making the platform level) = 1.930m Total mass, M, of platform and objects (kg) = 2 + 6.82 + 2.196 + 2.503 = 13.519 kg Procedure The first step of the experiment is to inspect the set up of the trifilar suspension, making sure the chains are tight and the platform is level and free to move without obstruction. Next the length of the chains connecting the suspension to the hanger must be measured using the metre stick. Now the object must be placed on the circular platform as discussed before at a set distance from the centre of the platform. ...read more.

as not all energy goes to rotational movement Human error involved in making sure the platform is displaced by exactly the same distance each time Human error involved in sighting when the platform has completed an oscillation. Objects were not held in place during the experiment, so again movement on the horizontal plane may have occurred which would again affect the results. Masses of the objects may not be precise as they were taken as given rather than measured on the actual day. Conclusion The trifilar suspension proves there is a relationship between the polar moment of inertia and the equation for periodic time, T, derived from the simple harmonic motion of the assembly. By completing the experiment it is clear to see that periodic time, of both calculated and experimental, are directly proportional to the ratio if experimental errors are taken into account. If the experiment was to be undertaken again, the following steps could be taken to increase the accuracy of the results: Take more results for the periodic time for all set ups (being restricted by time we were forced to only take three readings for both concentric and no object set ups. Devise a way to ensure the platform is displaced by the same amount each time, this could be done by use of a small post and visible mark on the platform, making sure both are aligned correctly before release. Use more and different arrangements of the solid objects to gain an even wider picture of the workings of the assembly. ...read more.