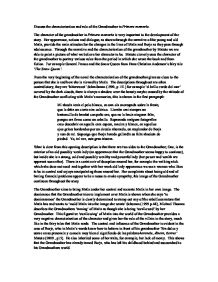 Discuss the characterisation and role of the Grandmother in Primera memoria. The character of the grandmother in Primera memoria is very important to the development of the story. Her appearance, actions and dialogue, as shown through the narrative of the young and old Matia, provide the main stimulus for the changes in the lives of Matia and Borja as they pass through adolescence. Through the narrative and the characterisation of the grandmother by Matute we are able to paint a picture of what we believe her character to be. Matute cleverly uses the character of the grandmother to portray various roles from the period in which she wrote the book and from fiction. For example General Franco and the Snow Queen from Hans Christian Andersen's fairy tale 'The Snow Queen'. From the very beginning of the novel the characterisation of the grandmother gives us clues to the person that she is and how she is viewed by Matia. The descriptions throughout are often contradictory, they are 'bittersweet' Schraibman (1990, p 151) for example 'el brillo verde del mar' covered by the dark clouds, there is always a shadow over the beauty maybe caused by the attitude of the Grandmother conflicting with Matia's memories, this ...read more.

that 'sniffed their footsteps to find them' Matute/Kerrigan (1991, p 19), as well as showing the intrusion and attempted interference in the lives of the youngsters Sandra Schumm believes this metaphor portrays an 'animal tracking its prey' Schumm (1999, p 47). Also she compares her Grandmothers eyes with those of an owl and calls her 'the beast' Matute/Kerrigan (1991, p 20) giving further information to the reader of the character and role of the Grandmother. On a small scale we are seeing a persecution of Matia by her Grandmother due to Matia's past and her rebellious nature, and many people would side with Matia and see the Grandmother as the villain. The character of Do�a Praxedes has a lot of authority in the small island where she and her family live. Many of the people are her tenants and she enjoys her position on top of a hill looking down over her dominion showing her influence. Matia resents this and in another descriptive paragraph we are able to sense these feelings of resentment. All� estar�a, como un dios panzudo y descascarillado, como un enorme y glot�n mu�ecazo, moviendo los hilos de sus marionetas. ...read more.

Anderson (1992) recognizes the 'stepmother authority figures' Anderson (1992, p.18) in both Primera memoria and The Snow Queen. The Grandmother plays the role of the Snow Queen in the novel and Matia's feelings when she stays at her Grandmother's house reflect those of Kay and Gerda when they meet the Snow Queen at her 'mirror of reason', Matia finds the same atmosphere at her Grandmother's house, 'frigid' Anderson (1992, p 19) and cold, mirroring the Grandmother herself. 'En casa de la abuela, hubo frialdad' Matute (1999, this shows Matia's feelings when in her Grandmother's house, there is no warmth or joy for Matia and as it turns out there is no happy ending either. In summary the character of the Grandmother in Primera memoria provides the novel with a villain; however she plays other important roles, as historical symbols, the destructive role she has in Matia's childhood and her role on the island. The characterisation of her is negative throughout, however Matia cannot dismiss her altogether, hence the bittersweet descriptions that we see. Despite this she is cold and indifferent and her traditionalist values mirror that of the Spanish dictatorship and in the end she was the cause of the turmoil that Matia suffered at the end of her childhood by poisoning her with her own attitude and image. ...read more.