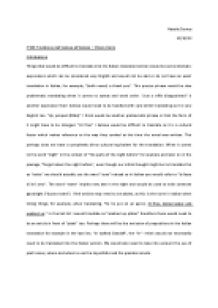 Annotated translation of a passage from &quot;The Hobbit&quot; into Italian.

﻿Natalie Dumas 31/10/12 IT301 Tradizione dall?inglese all?italiano ? Chiara Ciarlo Introduzione Things that would be difficult to translate into the Italian translated version would be some idiomatic expressions which can be considered very English and would not be said or do not have an exact translation in Italian, for example, ?(with never) a thank you?. This precise phrase would be also problematic translating when it comes to syntax and word order. ?Just a trifle disappointed? is another expression that I believe would need to be handled with care whilst translating as it is very English too. ?Up jumped (Bilbo)? I think would be another problematic phrase in that the form of it might have to be changed. ?Lit fires? I believe would be difficult to translate as it is a cultural factor which makes reference to the way they cooked at the time the novel was written. This perhaps does not have a completely direct cultural equivalent for the translation. When it comes to the word ?night? in the context of ?the party of the night before? for example and later on in the passage, ?forget about the night before?, even though our initial thought might be to translate this as ?notte? we should actually use the word ?sera? instead as in Italian you would refer to ?la festa di ieri sera?. ...read more.

is not explicitly said by use of the word ?while?, it is something continuous being done whilst he in this case ?went into the kitchen?. The ?si? that is attatched to the ?mettendo? is the third person singular reflexive pronoun referring to Bilbo as he is the subject putting on his dressing-gown. [3] I know that ?affrettare? means ?to hurry? so I felt that ?affrettata? would be the best translation for ?hurried? here. [4] I am not completely sure but I feel that ?padella e pentola?, which are the direct translation for ?pot and pan? can be used here, even though ?pots and pans? is a very English expression. [5] ?Seemed? I have translated as ?sembrava?, in the imperfect form because it is a description, and I decided to translate ?to have been used? as ?aver stato usato?. [6] I translated this is ?non ebbe fatto parte?. ?Had not? is the pluperfect but here it would be in the trapassato remoto because we have to stick to the same tense, passato remote, which I have chosen to use because it is a narrative tense. ?Fare parte di? means to be a part of. [7] I translated ?bad dreams?, something commonly said, as ?brutto sogno? because it sounded better in Italian. ...read more.

and ?piccola? as the alliteration of the double ?p? keep this same nicely sounding phrase. ?Colazione piacevole e piccola? - I changed around the order of the adjectives in Italian and added the ?e? to break up the phrase slightly. [18] To ?turn out? is another way of saying ?to arrange?, ?to equip? or ?to assemble?. Here it is in the gerund form of ?turning out?, but in the Italian I decided to put ?mettere in ordine?, in the infinitive form. [19] ?Letting in? again the ?-ing? suggests the gerund, hence ?lasciando entrare?. [20] I added ?abbastanza? here because I felt that ?caldo? would suggest ?hot? and here the implication is a bit lighter than that, it is just ?warm?. [21] The ?just doing something? in English can be translated in the Italian ?stare facendo qualcosa?. However I feel that because of the ?just? (gives us this sense of an instantaneous moment) this can also perhaps be interpreted as ?he was just about to (sit down)?, in this case it would be ?stava per (sedersi)?, therefore I have decided to translate this as ?stava per sedersi?. [22] ?In walked Gandalf? can be problematic to translate in the sense that in Italian for ?walk in? you might just say ?entrare? minus the preposition, which already suggests entering into somewhere. ...read more.

This student written piece of work is one of many that can be found in our University Degree Italian section.