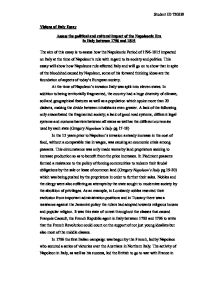 Visions of Italy Essay Assess the political and cultural impact of the Napoleonic Era in Italy between 1796 and 1815 The aim of this essay is to assess how the Napoleonic Period of 1796-1815 impacted on Italy at the time of Napoleon's rule with regard to its society and politics. This essay will show how Napoleons rule affected Italy and will go on to show that in spite of the bloodshed caused by Napoleon, some of his forward thinking ideas are the foundation of aspects of today's European society. At the time of Napoleon's invasion Italy was split into eleven states. In addition to being territorially fragmented, the country had a huge diversity of climate, soil and geographical features as well as a population which spoke more than 20 dialects, making the divide between inhabitants even greater. A lack of the following only exacerbated the fragmented society; a lack of good road systems, different legal systems and customs barriers between all states as well as the different currencies used by each state (Gregory Napoleon's Italy pg 17-18) In the 15 years prior to Napoleon's invasion a steady increase in the cost of food, without a comparable rise in wages, was causing an economic crisis among peasants. This circumstance was only made worse by land proprietors seeking to increase production so as to benefit from the price increases. In Piedmont peasants formed a resistance to the policy of forcing communities to redeem their feudal obligations by the sale or lease of common land (Gregory Napoleon's Italy pg 19-20) ...read more.

Joseph Bonaparte thereafter 'instituted four commissions to try every case within three months [when it involved a] prisoner of the crown' (Gregory, Napoleon's Italy pg 132). Another unfortunate aspect of trials at that time which was remedied was the deception and torture which had been used to intimidate witness. This was forbidden in any future trials, an element of conduct which can still be seen in today's legal system. Napoleon also introduced administrative reforms which he insisted were necessary to maintain a good organisation of all his territories. It was necessary to him to be able to rely on a 'stable system, manifest and secure, of good administration' (Capra, L'Et� 157-58). To achieve his goals Napoleon understood the necessity of having a class of Italian bureaucrats, and set out to recruit them from 'enlightened members of the propertied classes: supporters of the concept of a secular state, centrally and efficiently run' (Gregory, Napoleon's Italy pg 119). Nationalism was another social impact of Napoleon's reign in Italy. There were a small number of Italian intellectuals, lawyers and men of letters who greeted Napoleon's victories with passion. These men were often referred to as Jacobins, though today they would be referred to simply as patriots. The ideas to which they subscribed were ones which found triumph with the French; constitutional government, republicanism and national unity (Gregory Napoleon's Italy pg 176). As Napoleon entered Italy in 1796 he was looked on as a liberator who taught liberalism and nationalism to the fragmented nation he invaded. ...read more.

During his domination Napoleon had expressed the wish not only for a unified Italy but indeed a unified Europe. His removal from power set this ideal back almost 150 years, when it re-emerged after the Second World War, but it cannot be denied that this ideal was discussed openly by Napoleon, which insinuates that had he not been forced from power he might have pursued this ideal. In conclusion, it can be seen that Napoleon affected not only the Europe of his own time, and the Italy, but also the Europe many years into the future. The original state of unrest and fragmentation which was present upon Napoleon's invasion was addressed by him with an attempt to unify the country and bring about a number of reforms including legal, judicial and administrative reforms which affected not only the society of the early 19th Century but which affects can also still be seen in today's society, and legal system. The Napoleonic Code has had its effect on today's civil code, as well as the laws against treatment of criminals and the legal process due to them. Nationalism was another effect which was long-standing in Italy and which movement achieved its true goal in the unification of Italy in 1870. Napoleon's constant warring had the long term effect of removing France as the super-power of Europe and gave Great Britain the chance to step into the void. As the new super-power of Europe Great Britain achieved a historical legacy of greatness the like of which has only been rivalled in the recent history of the United States of America, the un-rivalled dominant country of modern society and politics. ...read more.

This student written piece of work is one of many that can be found in our University Degree Italian section.