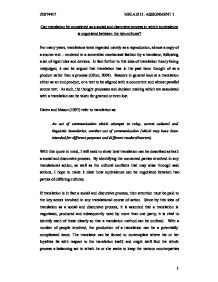 Can translation be considered as a social and discursive process in which equivalence is negotiated between the two cultures?

Can translation be considered as a social and discursive process in which equivalence is negotiated between the two cultures? For many years, translations were regarded merely as a reproduction, almost a copy of a source text - rendered in a somewhat mechanical fashion by a translator, following a set of rigid rules and devices. In fact further to this idea of translation theory being misjudged, it can be argued that translation has in the past been thought of as a product rather than a process (Olher, 2004). Readers in general look at a translation either as an end product, or a text to be aligned with a concurrent and almost parallel source text. As such, the thought processes and decision making which are associated with a translation can be taken for granted or even lost. Hatim and Mason (1997) refer to translation as: An act of communication which attempts to relay, across cultural and linguistic boundaries, another act of communication (which may have been intended for different purposes and different readers/hearers). With this quote in mind, I will seek to show how translation can be described as both a social and discursive process. By identifying the connected parties involved in any translational action, as well as the cultural conflicts that may arise through said actions, I hope to make it clear how equivalence can be negotiated between two parties of differing cultures. ...read more.

The first function of a text is "Informative", which Buhler (1934) described as the 'plain communication of facts'. An informative text will generally consist of logical information in which the topic is the main focus. Such texts will contain only relevant information linked to the original topic so as not to stray from its purpose. Elaborating on this, Reiss (1976) identified: reference works, reports, lectures, operating instructions and tourist brochures as examples of such texts. The next text type is what Buhler (1934) referred to as "Expressive" texts, which have a 'creative composition' and use an aesthetic dimension of language. The purposes of expressive texts are often unclear as they are written simply as a way for the author to articulate his or her thoughts, feelings and emotions. Reiss (1976) categorised: poetry, plays and novels as cases of expressive texts. The third and final text type that Buhler (1934) referred to was the "Operative" type. The key trait for such texts is that they 'introduce behavioural response' - in other words, a text that seeks to influence the reader so that they might be persuaded to act in a certain way. Techniques may involve use of rhetoric or emotive language to spark a reader response. Reiss (1976) pointed out: laws, minutes, advertisements and electoral speeches as examples of operative texts. With the three text types established, as well as the key actors involved in a translation process, it is now possible to examine the idea of equivalence and in particular how equivalence can be negotiated. ...read more.

When so many parties become involved in such a process, there is scope for debate and discussion over the best possible methods of translating. In other words, the inter-cultural communication provides the discursive aspect of translation, by which the best form of equivalence is negotiated. The translator acts as the mediator throughout and it is his or her responsibility to make sure that the translation is firstly and most importantly perhaps, in line with the original skopos of the commissioner (Vermeer and Reiss, 1989). Yet, while the four parties Vermeer identified add a social dimension to the way a text should be translated, there are factors besides cultural discourse that determine which form of equivalence should be used. Buhler (1934), by identifying the three functions of texts as: informative, expressive and operative, opened debate as to which texts warranted formally equivalent translations and which warranted dynamically equivalent translations. While operative text translations (such as contracts and legal statements) may require total accuracy on a very micro level, expressive texts (such as poems and novels) may require the translator to use his or her initiative so that the reader response is the same from the TT as it is from the ST. In some cases it may not be enough for the translator to follow a set skopos or gauge opinions from the two opposite cultures. It is the responsibility of the translator to take action and use what he or she considers to be the most apt form of equivalence for a particular text translation. Word count (exc. ...read more.