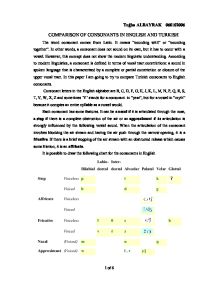 COMPARISON OF CONSONANTS IN ENGLISH AND TURKISH

Tugba ALBAYRAK 060102006 COMPARISON OF CONSONANTS IN ENGLISH AND TURKISH The word consonant comes from Latin. It means "sounding with" or "sounding together". In other words, a consonant does not sound on its own, but it has to occur with a vowel. However, this concept does not show the modern linguistic understanding. According to modern linguistics, a consonant is defined in terms of vocal tract constrictions: a sound in spoken language that is characterized by a complete or partial constriction or closure of the upper vocal tract. In this paper I am going to try to compare Turkish consonants to English consonants. Consonant letters in the English alphabet are B, C, D, F, G, H, J, K, L, M, N, P, Q, R, S, T, V, W, X, Z and sometimes 'Y' stands for a consonant in "year", but for a vowel in "myth" because it occupies an entire syllable as a vowel would. Each consonant has some features. It can be a nasal if it is articulated through the nose, a stop if there is a complete obstruction of the air or an approximant if its articulation is strongly influenced by the following vowel sound. When the articulation of the consonant involves blocking the air stream and having the air push through the narrow opening, it is a fricative. ...read more.