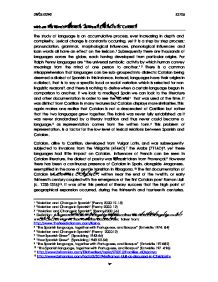 Discuss the lexical relations between Spanish and Catalan

Discuss the lexical relations between Spanish and Catalan The study of language is an accumulative process, ever increasing in depth and complexity. Lexical change is constantly occurring, yet it is a step by step process; pronunciation, grammar, morphological influences, phonological influences and loan words all have an effect on the lexicon.1 Subsequently there are thousands of languages across the globe, each having developed from particular origins. For Ralph Penny languages are "the universal symbolic activity by which human convey meanings from the mind of one person to another."2 There is a common misapprehension that languages can be sub-grouped into dialects: Catalan being deemed a dialect of Spanish in this instance. Instead, languages have their origins in a dialect, that is to say a specific local or social variation which is selected for non linguistic reasons3, and there is nothing to define when a certain language begun in comparison to another. If we look to medieval Spain we can look to the literature and other documentation in order to see the koin�4 that was used at the time. It was distinct from Castilian in many features but Catalan displays more similarities. This again makes one realise that Catalan is not a descendent of Castilian but rather that the two languages grew together. The koin� was never fully established as it was never standardised by a literary tradition and thus never could become a language,5 as representation comes from the written form.6 This problem of representation, is a factor for the low level of lexical relations between Spanish and Catalan. Catalan, alike to Castilian, developed from Vulgar Latin, and was subsequently subjected to invasions from the Visigoths (414AD)7 the Arabs (711AD)8, yet these languages had little impact on Catalan. ...read more.

The adoption of other words into a language can be expressed by the term "transcodic marker"38 a term defined by G.L�di. This covers a range of phenomena, two broad typologies are recognised. The first is "codeswitching", the second "interferences".39 Codeswitching can only occur in areas of bilingual speech as it is the "alternate activation of more than one language and is only possible for bilingual speakers".40 Interferences is the focus point of the study, dealing with phonetic, lexical, morphosyntactic or semantic material that is transferred from one language to another, a process which can occur for both bilinguals and monolingual speakers. As stated in the introduction, the acquisition of language is a accumulative process, and the study represents the most recent part of this process. The Castilian spoken by these children is influenced by Catalan which is taught in the school, differentiating their Castilian from Castilian habitually spoken in other monolingual areas. My hypothesis that Castilian and Catalan would have relatively low lexical relations due to the conflict between its peoples is confirmed by the low level of transcodic markers in each language. However, the percentage of transcodic markers found in Castilian are considerably lower than in Castilian. The study highlights that transcodic markers made up for 3.57%41 of words included in Catalan speech, yet only 0.57%42 in Castilian. It is important to note that this is a study on colloquial conversation and therefore would struggle to be assimilated into the lexicon of the language because the necessity of written forms. However, it is an important study as it represents an example of modern lexical relations. It is possible to see that the loan words incorporated came from the field of games and leisure. ...read more.