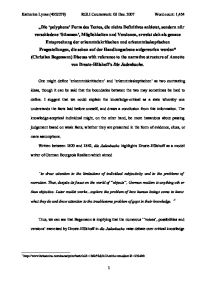 "Die 'polyphone' Form des Textes, die nichts Definitives anbietet, sondern n�r verschiedene 'Stimmen', M�glichkeiten und Versionen, erweist sich als genaue Entsprechung der erkenntniskritischen und erkenntnisskeptischen Fragestellungen, die schon auf der Handlungsebene aufgeworfen werden" (Christian Begemann) Discuss with reference to the narrative structure of Annette von Droste-H�lshoff's Die Judenbuche. One might define 'erkenntniskritischen' and 'erkenntnisskeptischen' as two contrasting ideas, though it can be said that the boundaries between the two may sometimes be hard to define. I suggest that we could explain the knowledge-critical as a state whereby one understands the facts laid before oneself, and draws a conclusion from this information. The knowledge-sceptical individual might, on the other hand, be more hazardous about passing judgement based on weak facts, whether they are presented in the form of evidence, clues, or mere assumptions. Written between 1820 and 1842, die Judenbuche highlights Droste-H�lshoff as a model writer of German Bourgeois Realism which aimed 'to draw attention to the limitations of individual subjectivity and to the problems of narration. Thus, despite its focus on the world of "objects", German realism is anything other than objective. ...read more.

An additional way in which the role of the narrator reigns supreme is through the withholding of information from the reader, a trait clearly portrayed in the events surrounding the death of Hermann Mergel. The young Friedrich believes he hears a knocking on the door, "Mutter - es pocht draussen! [...] Nein, Mutter, an der Tur!" (Judenbuche, p.14, lines 19-21). The narrator subtly suggests to the reader, through Friedrich's own fears, that Herr Mergel is in fact outside in the storm, trying to get into the house. The reader is given no further clues or commentary regarding the either the noise Friedrich hears, or cause of Herr Mergel's death. Even though Friedrich's initial fears are never proven, the reader is provided with no alternative perspective and is left guessing. This, as it turns out, is a sign of things to come in the novel as a whole: there are many occasions on which the reader must draw their own conclusions. Similarly vague is the murder of Brandis - no one bears witness to his death (apart from the murderer himself, who is never revealed), and Droste-H�lshoff provides no commentary to accompany the act. ...read more.

Personally, the means employed by Droste-H�lshoff which I find most effective is the overall way in which we are provoked by the narrator. First, we are reliant on him for guidance, since so many gaps are left in the narrative - for example, why is Freidrich's home town referred to only as 'Dorfe B'? Such ambiguity from the very start prompts us to view the whole novel as a mystery, and thus from this vulnerable position we depend on the narrator to provide clues. Secondly, we are allowed pieces of seemingly advantageous knowledge, strengthening our bond with, and almost levelling us with, the narrator. We are then, thirdly, deprived of our sense of superiority when Johannes Niemand's true identity is slowly revealed, and we realise that the narrator has perhaps not been as honest with us as we think - we are treated as inferior as the unsuspecting inhabitants of 'Dorfe B'. I consequently argue that the numerous ''voices', possibilities, and versions' require the reader to actively decide whether their own relationship with the narrator is one of trust or incredulity, thus prompting them to categorise themselves as critical or sceptical of the knowledge gained from die Judenbuche. ...read more.

This student written piece of work is one of many that can be found in our University Degree German section.