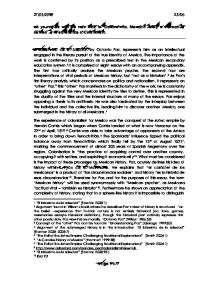 Do you agree with the view that, for Octavio Paz, Mexican history is irrevocably defined by its experience of Colonialism? El Laberinto de la Soledad by Octavio Paz, represents him as an intellectual engaged in the literary pursuit of the true identity o

Do you agree with the view that, for Octavio Paz, Mexican history is irrevocably defined by its experience of Colonialism. El Laberinto de la Soledad by Octavio Paz, represents him as an intellectual engaged in the literary pursuit of the true identity of Mexico. The importance of the work is confirmed by its position as a prescribed text in the Mexican secondary education system.1 It is comprised of eight essays with an accompanying appendix. The first four critically analyse the Mexican psyche, the second four are interpretations of vital periods of Mexican history, but "not as a historian".2 As Paz's first literary analysis, which concentrates on politics and nationalism, it represents an "other" Paz.3 This "other" Paz manifests in the dichotomy of the work, he is constantly struggling against the very Mexican identity he tries to define. This is represented in the duality of the titles and the internal structure of many of the essays. Paz enjoys opposing a thesis to its antithesis. He was also fascinated by the interplay between the individual and the collective life, leading him to discover another Mexico, one submerged in the history of all Mexicans.4 The experience of colonialism for Mexico was the conquest of the Aztec empire by Hern�n Cort�s which begun when Cort�s landed at what is ...read more.

The secret is being the "fruto de una violaci�n"31, with two historical parental figures: the violated mother and the father who shows "indiferencia frente a la prole que engendra"32. A direct identification can be seen, the mother as Do�a Marina33 and the father as Cort�s. For Mexicans, the passive mother is, "fascinadas, violadas o seducidas"34 by the father who "viene de lejos"35. The animosity with the "gran Ching�n"36 is what incurs them to deny their origins, discrediting the influence of the conquistadores and therefore the Colonial period. What's more, the verb is used across the American continent to "denota violencia"37 and is "un verbo agresivo"38. The word is endowed with negative connotations, negativity the Mexican wants to forget. Essentially the battle cry is, for Paz, the only time the Mexican shows "como somos de verdad" 39. In this way, as Mexican believe their character is completely determined by this violation, it is therefore what has contributed to their psyche. The continued usage of chingar in Mexico, coupled with its direct link to the Colonial period, confirms that colonialism has affected Mexican history and therefore psyche. Even Paz concedes that it does not seem "forzado asociarla a la Conquista"40. ...read more.

Taking everything into consideration it is almost impossible to decipher whether Paz feels that colonialism has defined Mexican history, looking only at El Laberinto y la soledad. Each section of the text shows an insight into how Mexicans think but the cause is often masked.59 The duality which runs throughout the text, almost leading one to give a dual answer, is inherently is no answer at all. Paz states that Mexicans are "los �nicos" who can "contestar"60 the question of their solitude, but inherently, as a Mexican, he cannot. However, I do feel that within the essays studied there is an overriding sense of betrayal and hatred directed toward elements attributed with the colonial rule, particularly the "gran Ching�n"61. Therefore, from an outsiders point of view, it can be accepted that colonialism had an impact on Mexican history but it does not irrevocably define that very history. As regard for Paz's opinion, it is impossible to gauge a definite answer from the text due to Paz's irresistible desire to refute much of his own history. However, Paz alludes to the impact that colonialism has had, but at certain points, he puts on his Mexican mascara and attempts to shy away from his origins he wishes to forget. What can be said is it most definitely does not irrevocably define, but perhaps aggravates an already apparent scar in the Mexican psyche. ...read more.