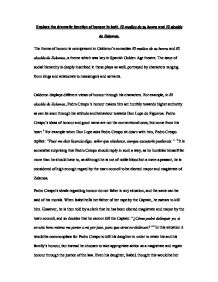 Explore the dramatic function of honour in both El medico de su honra and El alcalde de Zalamea. The theme of honour is omnipresent in Calderon's comedias El medico de su honra and El alcalde de Zalamea, a theme which was key in Spanish Golden Age theatre. The issue of social hierarchy is deeply inscribed in these plays as well, portrayed by characters ranging from kings and aristocrats to messengers and servants. Calderon displays different views of honour through his characters. For example, in El alcalde de Zalamea, Pedro Crespo's honour makes him act humbly towards higher authority as can be seen through his attitude and behaviour towards Don Lope de Figueroa. Pedro Crespo's ideas of honour and good name are not the conventional ones, but come from his heart.1 For example when Don Lope asks Pedro Crespo sit down with him, Pedro Crespo replies: "Pues me dais licencia digo, se�or que obedezco, aunque excusarlo pudierais." 2 It is somewhat surprising that Pedro Crespo should reply in such a way, as he humbles himself far more than he should have to, as although he is not of noble blood but a mere a peasant, he is considered of high enough regard by the town council to be elected mayor and magistrate of Zalamea. ...read more.

Through his character development, Calderon manages to portray Pedro Crespo as a good man, mainly through his ideas of honour and his morals. What is admirable of Pedro Crespo is not found in the Captain: Pedro Crespo would fight to the death for his honour to stay intact (and for his daughter), whereas the Captain would not. Whilst fighting the Sergeant and Rebolledo, Pedro Crespo says to them, "Soltad la presa, traidores, cobardes que hab�is que he de cobrarla, o la vida he de perder,"12 expressing his determination to get his daughter and honour back. We see the Captain's view of honour in Act III when he says to Rebolledo, "que en la justicia, es forzoso remitirme en esta tierra a mi consejo de guerra: conque aunque el lance es penoso, tengo mi seguridad."13 If one interprets the term 'seguridad' to mean security of his life then it can be said that the captain has more regard for his life than his honour. In Calderon's 'drama de honor'14, El medico de su honra, we see similar and new concepts of honour. The metaphor in the title refers to Don Gutierre who is the 'medico' and his patient, 'su honra', translating to the surgeon of his honour. ...read more.

"She is assertive and outspoken- perhaps because it is her nature"21 or because she believes that after her honour has been taken away she has nothing else to lose. Do�a Leonor goes to King Pedro when he arrives in Seville asking him to sponsor her in a convent. He her life would have been protected and some of her honour restored. Through the character of Do�a Leonora Calderon shows what good can still be done when one has lost their honour. Unlike Prince Enrique who ran away instead of facing consequences, Do�a Leonora goes to the king and tells her story with the risk of no one believing her. Fortunately, Don Arias comes to her rescue and Do�a Leonor's honour is restored when she marries Don Gutierre, a somewhat superficial result. Calderon's dramatic function of honour in both comedias plays a large role, as it is essentially what the comedias are about: the earning of honour and the restoration of it. Each character has a different view of what he/she think honour should be and this in turn effects their actions and most importantly, the lives of others. By making the audience sympathise with certain characters, such as Pedro Crespo, Calderon manages to show what honour should be and how one should treat it. ?? ?? ?? ?? ...read more.