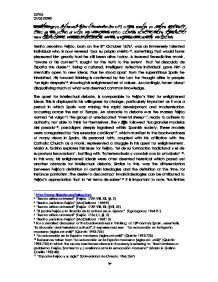 Illustrating your answer from a minimum of 3 of the essays you have studied, discuss the various ways in which Benito Jeronimo Feijo can be said to have fathered a new approach to intellectual debate in the eighteenth century in Spain.

Illustrating your answer from a minimum of 3 of the essays you have studied, discuss the various ways in which Feij�o can be said to have fathered a new approach to intellectual debate in the eighteenth century in Spain. Benito Jeronimo Feij�o, born on the 8th October 16761, was an immensely talented individual who is now revered "por su propio m�rito"2, something that would have pleasured him greatly had he still been alive today. A learned Benedictine monk, "aware of his context"3, sought for the truth to the extent that "el descuido de Espa�a me duele"4. Being a cultured, intelligent, reflective individual gave him a mentality open to new ideas, thus he stood apart from the superstitious Spain he inhabited. His forward thinking is confirmed by the fact he thought alike to people "un siglo despu�s"5, showing his enlightened set of values. Accordingly, he set about disqualifying much of what was deemed common knowledge. The quest for intellectual debate, is comparable to Feij�o's thirst for enlightened ideas. This is displayed in his willingness for change, particularly important as it was a period in which Spain was missing the rapid development and modernisation occurring across the rest of Europe. An obstacle to debate was the masses Feij�o named "el vulgo"6, the group of uneducated "mental sheep"7, ready to adhere to authority, not able to think for themselves. ...read more.

Similarly, intellectual debate would previously be confined to religious people and other established members of society, but Feij�o wrote for the masses. He appreciated that change needed to come from the bottom strata of society as well as the higher social classes. His writing style, in terms of the wider audience and the conversational manner, is another way in which he fathered intellectual debate and is something that shall be examined later in the essay. Another new approach to debate, is the simplicity of the examples to consolidate knowledge claims. By using simple examples Feij�o is able to engage a wider strata of audience. For example, in Voz del pueblo, when discussing the complexity of knowledge and how often it is invalid, Feij�o gives the simple example of a square and how "solo de un modo"35 can a square be a square. In this way, the reader is able to realise the misconception that all believed knowledge is true, as it is easier to be wrong. Deconstructing misconceptions is one way to spur debate, giving simple and concise evidence to support claims, entices the reader to engage with and understand the issue. What's more the vast quantity of examples given, be it of the natural world or the secular, expresses his point in a different ways, thus the reader has more chance of understanding the concept. ...read more.