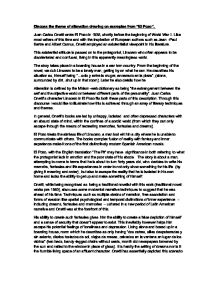 Discuss the theme of alienation drawing on examples from "El Pozo". Juan Carlos Onetti wrote El Pozo in 1938, shortly before the beginning of World War II. Like most writers of this time and with the inspiration of European authors such as Jean-Paul Sartre and Albert Camus, Onetti employed an existentialist viewpoint in his literature. This existential attitude is passed on to the protagonist, Linscero who often appears to be disorientated and confused, living in this apparently meaningless world. The story takes place in a boarding house in a war torn country. From the beginning of the novel, we dub Linscero to be a lonely man, getting by on what he can. He describes his situation as, himself being "...solo y entre la mugre, encerrado en la pieza", (alone, surrounded by dirt, shut up in that room). Later he also details how he Alienation is defined by the Miriam-web dictionary as being "the estrangement between the self and the objective world or between different parts of the personality". Juan Carlos Onetti's character Linscero in El Pozo fits both these parts of this description. Through this discourse I would like to illustrate how this is achieved through an array of literary techniques and themes. In general, Onetti's books are led by unhappy, isolated and often depressed characters with an absurd state of mind, within the confines of a sordid world (from which they can only escape through the means of recreating memories, fantasies and dreams). ...read more.

Linscero realises the mediocrity of his existence and seeks salvation through writing. Linscero tries to convince the reader that his fantasies are somewhat beautiful, artistic depictions of his vivid imagination. However, telling the story of how he raped a young girl could not possibly be described in these terms. We see in the story that he describes his fantasies or "adventures" as he likes to call them to two people - with the exception of Lorenzo and Lazaro, this is the only time the reader is exposed to him communicating with people - and it does not go down well at all. His attempts to communicate although he denies claims that other peoples rejection doesn't affect him, would seem to build up frustration, a sense of failure and add to his self loathing. His break up with Hanka illustrates his inability to love. Onetti often used love as a factor which could solve situations which arose but Linscero's problems are much deeper than this. His misogynistic viewpoints only add to the hatred that one can feel against him. He not only thinks about women in a demeaning way, but also fantasies and ultimately treats them in a similar manner. It is interesting however that he mentions his highest love (his wife) ...read more.

"Tambien podria ser un plan el ir contando un 'suceso' y un sueno" (That could be a good angle - to relate an 'incident' and a dream). His sick mind full of lies and deceit only encourages the reader to believe that there is no hope for this poor character. Who knows whether any of what he tells us is true? Perhaps the r**e was a turning point in his life; at least there must be some reason why it stands out in his memory but not through shame. He mentions at the start of the novel before he starts writing his memoirs things that he will not mention. "Resuelto a no poner nada de... la estancia o en el tiempo de la universidad. Podria hablar de Gregorio, del ruso que apercio muerto en el arroyo, de Mar�a Rita y el verano en Colonia. Hay milles de cosas y podria llenar libros" (I'm certainly not going to put down anything about... the ranch or my time at university. I could talk about Gregorio, about the dead Russian washed up in the stream, about Mar�a Rita and that summer in Colonia. There are thousands of things. I could fill book upon book). If this quote is true, insofar as it isn't something else he has made up to kill some time and entertain himself with, he should be able to write his memoirs more effectively. ...read more.