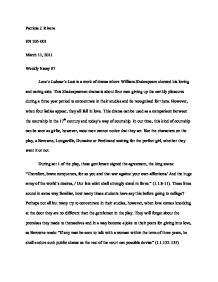 Patricia J. Rivera EN 205-001 March 11, 2011 Weekly Essay #7 Love's Labour's Lost is a work of drama where William Shakespeare showed his loving and caring side. This Shakespearean drama is about four men giving up the earthly pleasures during a three year period to concentrate in their studies and be recognized for them. However, when four ladies appear, they all fall in love. This drama can be used as a comparison between the courtship in the 17th century and today's way of courtship. In our time, this kind of courtship can be seen as girlie, however, most men cannot notice that they act like the characters on the play, a Berowne, Longaville, Dumaine or Ferdinand waiting for the perfect girl, whether they want it or not. ...read more.

Many students are willing to give up anything to become what they want to be, unfortunately it is not all of them. Perhaps many of college students can relate to Costard, clever and willing to risk being punished for his love to Jaquenetta, as he states: "I had rather pray a month with mutton and porridge." (1.1.302-303), this also shows that when it comes to love one can become a rebel and somehow a child in this matter, that what he wants he must have and he rather be punish for wanting it. The princess and her ladies also resemble today's woman, witty, decisive, and they let the men do much of the courting, but they are the ones that want to be in control of the situation. ...read more.

When a man ask for something, such as dance, one should deny the first try, as the princess states: "No, to the death we will not move a foot, / Nor to their penned speech render we no grace, but while 'tis spoke each turn away her face" (5.2.153-155). By denying an invitation a woman knows that if he is really interested he will ask again. Shakespeare somehow ended the play quite different than expected, however, he left the reader with the knowledge of courtship, what a man is capable to do for his beloved, and what a woman may do to test that love, it is not cruelty, it is just a test for both parts to see who is worthy to say they have fallen in love. ...read more.