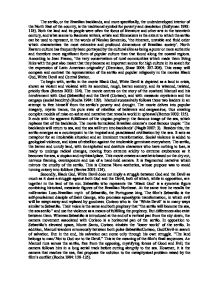 The representation of the serto and popular religiosity in the movies Black God, White Devil and Central Station

The sert�o, or the Brazilian backlands, and more specifically, the underdeveloped interior of the North East of the country, is the traditional symbol for poverty and desolation (Hollyman 1983: 118). Both the land and its people were often the focus of literature and other arts in the twentieth century, and what seems to fascinate writers, artists and filmmakers is the extent to which the sert�o can be used to represent, in the words of Nicolau Sevcenko, 'the itinerant, unstable and fluid order which characterizes the most extensive and profound dimensions of Brazilian society'. North Eastern culture has frequently been portrayed by the cultural elite as being a purer or more authentic and therefore more significant form of popular culture than that found along the coastal regions. According to Jean Franco, 'the very conservatism of rural communities which made them living links with the past also meant that they became an important source for high culture in its search for the expression of Latin American originality' (Dennison, Shaw 2004: 207-208). This essay will compare and contrast the representation of the sert�o and popular religiosity in the movies Black God, White Devil and Central Station. To begin with, sert�o in the movie Black God, White Devil is depicted as a land in crisis, shown as violent and violated with its scorched, rough, barren scenery, and its wizened, twisted, prickly flora (Bentes 2003: 124). ...read more.

Corisco who is the 'White Devil' is in many ways similar to Sebasti�o. Their voice is the same and both prophesy that "the sert�o will become the sea, the sea sert�o " and use the violence as a means of fulfilling the prophecy. But differences also exist between them. Whereas Sebasti�o is introduced at the end of a vertical pan from the sky down, the camera movement associated with Corisco is a horizontal pan of the sert�o. In opposition to Sebasti�o's elevated space, Monte Santo, Corisco inhabits the 'lower world' of the sert�o. In addition, Manuel wanders erroneously between both poles-Sebasti�o/Corisco, God/Devil-in search of salvation. But in the end, his salvation can come only through his own struggle. "The land belongs to man/ Not to God nor to the Devil." This is the meaning of the film's final sequences. As Manuel runs across the sert�o, free from the opposing, mystifying forces of Good and Evil, the camera follows him in a long aerial track before cutting abruptly to the sea. However, it is the camera that reaches the sea, that proposes the solution to the metaphysical problem raised by the film's conflict (Rocha 1984: 128-135). In comparison with Black God, White Devil, Central Station presents a romanticized sert�o, an "idealized return to the roots," a "territory of conciliation and pacification,' offering a 'melancholic and conciliatory 'happy ending' that is distant from Rocha's utopian gesture toward transcendences and freedom" (Johnson 2005: 34). ...read more.

His prayers are answered when he meets his surrogate mother, Dora, who helps him fulfill his destiny (Nagib 2007: 43-44). The movie also shows the religiosity of the masses and is filled with fascinating examples of the rich North Eastern traditions of popular Catholicism. These include the sequences featuring the Virgin Mary of the Candlelight parade, in which the only light is from millions of candles. Salles describes this celebration as bringing 'the possibility of a ray of light in the darkness which in a way is emblematic of cinema itself', marking a clear difference between the depiction of popular Catholicism in his film and the old Cinema Novo way of seeing religion as the opium of the people (Dennison, Shaw 2004: 214). To conclude, in both movies sert�o represents different ways of coming to terms with the realities of Brazil. Black God, White Devil uses the sert�o as the most obvious expression of social divisions, conflict and discord, whereas Central station associates this setting with a sense of community, the accommodation of opposites and the elimination of differences (Oricchio 2003: 153). Central Station replaces the bleak mood of Cinema Novo classic, which became synonymous with the 'aesthetics of hunger', with optimism and possibility for the inhabitants of the North-East. In Central Station the search for the father, corresponds on a metalinguistic level, to the quest for the North-Eastern fatherland lost in the past of Cinema Novo (Dennison, Shaw 2007: 110-111). ...read more.

This student written piece of work is one of many that can be found in our University Degree Portuguese section.