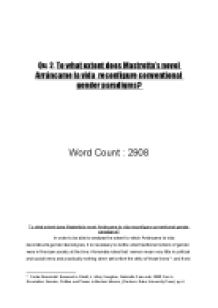 ï»¿Qu. 2. To what extent does Mastretta’s novel Arráncame la vida reconfigure conventional gender paradigms? Word Count : 2908 To what extent does Mastretta’s novel Arráncame la vida reconfigure conventional gender paradigms? In order to be able to analyse the extent to which Arráncame la vida deconstructs gender stereotypes, it is necessary to define what traditional notions of gender were in Mexican society at the time. Monsiváis notes that ‘women mean very little in political and social terms and practically nothing when set before the deity of those times’[1], and fixed divisions of gender are apparent within the novel itself, ‘preferiría oír la plática de los hombres, pero no era correcto. Siempre las cenas se dividían así’[2]. This would suggest that women were seen as generally inferior to and weaker than men, and that there was a great divergence in the expected standards of behaviour between the sexes. I would agree with the numerous critics who see the novel as a feminisation of the Mexican Revolution, and would add to this by saying that Mastretta subverts the idea of history as written by males by contributing as a female author as well as by offering a first person feminine perspective of the events of the time. It is arguably not just the notion of history that Mastretta is challenging, but also the paradigms on which the patriarchal binarism of the period was founded. In this essay I will discuss the ways in which the author reconfigures traditional gender codes, and then analyse how the novel may not contest conventional masculine orthodoxy as much as it may first appear to. ...read more.

as the purpose of these s****l encounters I deem to be to relieve boredom, whereas it is merely with Carlos Vives that her affair is of a deeper, masculine nature. Despite this, all of Cati’s affairs are an indication that the author is breaking away from traditional gender paradigms where the woman is expected to be the victim of affairs rather than engaging in them. It is also true that Catalina’s relationship with Vives is a display of her control and power over Andrés , ‘las acomodé en una olla de barro en medio de la mesa’[18], embodied by the moment where she arranges some flowers from a field where she had s*x with Carlos, in the middle of a table in the home she shares with her husband. This brazen reminder of her lover in her house is a mark of disrespect for Andrés which serves to reinforce the way in which the author of Arráncame... challenges fixed hierarchies of gender by showing Catalina as powerful, strong and in control of her husband. Lavery points out that in most patriarchies, authority is linked to masculinity and is synonymous with virility and strength,[19] therefore Catalina’s ability to subtly control her husband and undermine his virility is another key aspect in the argument that Mastretta’s novel reconfigures gender paradigms. It seems to be widely recognised by people of the town that Cati can not only handle Andrés, but manipulate him, ‘-la gente dice que usted lo puede manejar’[20], and the idea of her having control over husband does indeed challenge existing notions of gender in Mexican society at that time. ...read more.

Moreover, she chooses to ignore the knowledge that Andrés has killed innocent people ‘yo prefería no saber qué hacía Andrés’[32], even though she suspects that this is the case. Catalina also conforms with masculine orthodoxy in another respect, since she has a machista attitude towards other women, ‘suspiraba como si quisiera que alguien, por favor, se la cogiera’ [33] and her thoughts surrounding other women are often similar to that of her husband. These aspects of the novel restrict the extent to which it challenges conventional views on gender since they seem to consolidate traditional gender codes of Mexican society at the time. Overall I would say that the novel definitely reconfigures traditional gender paradigms more than it reinforces them, and provides a different perspective on this period in Mexican history. Lavery sees the expression of ‘no lo dicho’ as part of Mastretta’s specific style of feminism[34], and I would agree that her feminism is ambiguous, la legislatura poblana les dio el voto a las mujeres, cosa que sólo celebraron Carmen Serdán y otras cuatro maestras’[35], as there seems to be no sense of female solidarity in the novel. Despite this, Arráncame... does serve to critique machismo and challenge existing notions of gender. The adoption of a female first person perspective by Mastretta, for me, inverts conventional gender codes from the outset, as it defies the concept of women as existing on the margins or being a silenced voice. Moreover, I agree with Gold who deems the novel ‘a restructuring of the classic male Bildungsroman’[36] for a female protagonist, which serves to consolidate its status as a work which breaks away from fixed notions of gender identity. ...read more.