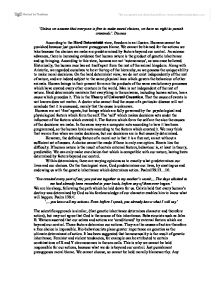 &amp;#145;Unless we assume that everyone is free to make moral choices, we have no right to punish criminals&amp;#146;. Discuss

'Unless we assume that everyone is free to make moral choices, we have no right to punish criminals'. Discuss According to the Hard Determinist view, freedom is an illusion. Humans cannot be punished because just punishment presupposes blame. We cannot be blamed for the actions we take because the choices we make are predetermined by factors beyond our control. As science advances, there is increasing evidence that human nature is the product of genetic inheritance and up bringing. According to this view, humans are not 'autonomous', as was once believed. Historically, the human race has set itself apart from the rest of the animal kingdom. Along with Aristotle, we regarded ourselves to be at the top of the hierarchy, as we possess the unique ability to make moral decisions. On the hard determinist view, we do not exist independently of the rest of nature, and are indeed subject to the same physical laws which govern the behaviour of other animals. Human beings in their present form are the products of the same evolutionary processes which have created every other creature in the world. Man is not independent of the rest of nature. Hard determinists maintain that everything in the universe, including human action, has a cause which precedes it. This is the Theory of Universal Causation. That the cause of events is not known does not matter. A doctor who cannot find the cause of a particular disease will not conclude that it is uncaused, merely that the cause is unknown. Humans are not 'free' agents, but beings which are fully governed by the psychological and physiological factors which form the self. The 'self' which makes decisions acts under the influence of the factors which created it. The factors which form the self are the also the causes of the decisions we make. In the same way as a computer acts according to how it has been programmed, so the human brain acts according to the factors which created it. ...read more.

Consequently those who believe that they speak, or are silent, or do anything else from a free decree of the mind, dream with their eyes open.' Determinism therefore holds that the experience of deliberation is admissible for evidence for the belief in the existence of free will, but not admissible as evidence for the actual existence of free will, as experience can be deceiving. On the determinist view, any evidence based on experience, including scientific conclusions based on experiment, must be rejected on grounds of possible deception. A libertarian does not dispute that experiences can be deceiving, but asserts that the possibility of deception does not mean that experience cannot be accepted as sufficient evidence for the truth of belief in free will. Contrary to Platonian thought (that truth cannot be found in the contingent world), libertarians do not reject sense experience as a basis for knowledge. Although sense experience is insufficient when matched against the requirements for necessary truths which exclude error (Moore's closed questions), it is sufficient to provide evidence for contingent truths- those which are reached on the basis of corrigible evidence. According to Swinburne's Principle of Credulity, experience is normally reliable, and our sense experience can normally be relied upon as a source of evidence (in contrast with Plato). Swinburne is not saying that experience is infallible, just that it is more likely to be true than not and that we should go with the balance of probability, which is that we can trust what our senses tell us: 'Initial scepticism about perceptual claims... will give you no knowledge at all.' If we always reject of sense experience as grounds for knowledge, we shall find ourselves, according to Swinburne, in an 'Epistemological q***r street'. The majority view lies somewhere in between the determinist and libertarian view. Soft Determinism accepts that freedom is incompatible with fatalism, the view that humans are powerless to change the course of their lives, but it is compatible with determinism if we accept that our own choices and desires are among the causes which determine our actions. ...read more.

Over time, society has grown to accept and even to respect homosexuals. This genetic difference has had a positive influence on social morality, making society more tolerant -could not other genetics currently deemed to be 'undesirable' have the same effect, if only we would let them? If right and wrong are only relative to culture, as opposed to being absolute, is punishment according to a moral code which we do not accept an infringement of our human rights? Ultimately, if we choose to live in a particular community, we are subject to its laws; we enter into a mutual contract, which includes the respect of laws. It is a price to pay for the enjoyment of communal living. When western women go on holiday to Saudi Arabia, they must conform to the modest dress code, although they are at liberty to dress more freely in their own society. They want to experience an Arab country and society, but in order to do this, the Islamic laws of that society and must be respected, even if you do not share the faith. If a holidaymaker chooses to break these laws, the 'contract' has been broken and the person must be deported-removed from the society. In Britain those who do not agree to respect the laws of society are also removed from society to exist in another environment in which they can continue to live by their own moral standards without affecting others or social stability. This is why criminals must be punished, for the good of the majority. Their actions may well be caused by conditioning influences over which they have no control, but society cannot judge them 'innocent' on these grounds. Society must say 'maybe you did not know better then, but when we have finished with you, you will'. Claiming 'diminished responsibility' on the grounds of pre-determined action and absence of free will is a recipe for social chaos which is entirely undesirable and impractical. ...read more.