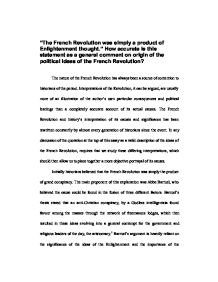 "The French Revolution was simply a product of Enlightenment thought." How accurate is this statement as a general comment on origin of the political ideas of the French Revolution? The nature of the French Revolution has always been a source of contention to historians of the period. Interpretations of the Revolution, it can be argued, are usually more of an illustration of the author's own particular consequences and political leanings than a completely accurate account of its actual causes. The French Revolution and history's interpretation of its causes and significance has been rewritten constantly by almost every generation of historians since the event. In any discussion of the quotation at the top of this essay as a valid description of the ideas of the French Revolution, requires that we study these differing interpretations, which should then allow us to piece together a more objective portrayal of its causes. Initially historians believed that the French Revolution was simply the product of grand conspiracy. The main proponent of this explanation was Abbe Barruel, who believed the cause could be found in the fusion of three different factors. Barruel's thesis stated that an anti-Christian conspiracy, by a Godless intelligentsia found favour among the masses through the network of freemasons lodges, which then ...read more.

"If we look for rational, physical causes of misfortune instead of attributing them to witchcraft, if accept the impersonal wage system in place of personal slavery, if we reject the torture of individuals as a means of eliciting the truth and use instead use the impersonal rules of law, if we do not regard personal salvation as so important that we are not prepared to burn people in order to achieve it for them as well as ourselves, if we do not believe that the stars are concerned with our individual fortunes, and so on, we are tacitly acknowledging the influence of the Enlightenment over our assumptions and actions..."6 Under this reasoning it is clear that the French Revolution and modern society is indebted to the effects of the Enlightenment. After the proclamation of the sovereignty of the National Assembly in 1789, the assertion of the supremacy of law over all other interests was accomplished.7 In this respect the ideas of the Enlightenment clearly shone through. Cobban of course is part of the next generation writing in the 20th Century but despite Cobban's explanation of the Enlightenment and his provision of plausible ties to the French Revolution, he refuses to expressly acknowledge the influence of one of the most closely linked writers of the Enlightenment, Jean Jacques Rousseau. ...read more.

In the interest of this objectivity though, the fact that Cobben's explanation appears most convincing is perhaps not a coincidence considering he is a more recent historian. There were people who firmly believed in the explanations of Barruel and Michelet and now it seems perhaps a little to convenient that the likes of Cobban seem more persuasive. As it was stated at the beginning of this essay, history is written under the influence of current events and bias, so who is to say that to deem the French Revolution the beginning of the age of nationalism is not simply a vain attempt to justify events of our own time. After all is one of the main motivations for the study history not the search for explanations to present situations? Whatever the case maybe it is clear that to give the credit for the ideas of the French Revolution to the Enlightenment only would be incorrect. Whether Cobban's suggestion of the part absolute monarchy is enough or not remains to be seen. Clearly though even the Enlightenment did not happen by itself. The years preceding it and the trends of that age inspired the thoughts and reflections of those thinkers, this in itself means that it would be naive to rely to heavily on the Enlightenment as the single explanation for the ideas behind the French Revolution. ...read more.