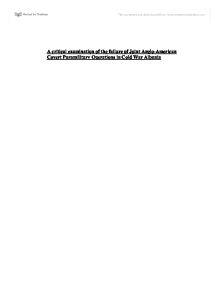 A critical examination of the failure of Joint Anglo-American Covert Paramilitary Operations in Cold War Albania In the late 1940s and early 1950s a joint Anglo-American operation to destabilise the communist regime in Albania was launched from the cabinet rooms and corridors of Whitehall and Washington. This operation was titled 'Valuable' by the British and 'Fiend' by the Americans.1 Designed to deny the USSR harbours for their navy and destabilise Hoxha's Albanian regime, the operation was an appalling failure. The historical narrative that concerns the operation has been chronicled by a number of scholars.2 The task here is not to chronicle the operation but rather to critically examine the reason for its failure. The knowledge that the operation was betrayed by Harold Philby, the Soviet Cambridge mole, has meant that other important factors responsible for the operations failure have been overlooked. This paper aims to examine the impact of the betrayal by Philby and compare that to the list of incompetent actions that assisted the demise of the operation. Actions that included poor intelligence and a reliance on a splintered community, a lack of pre-operational propaganda, the lack of basic security and tradecraft amongst the �migr� operatives and mission overseers, discord over policy and mission development decisions, derisory equipment and training for the �migr� operatives and a gross underestimation of the Sigurimi. 3 Actions that meant had Philby not compromised the operations security, the likelihood of success was minuscule. In order to critically evaluate OVF one must define the measure of success when tested against an intelligence operation. The success or failure of any intelligence operation can be defined in these terms - were the mission parameters achieved in such as way as to improve the strategic goals of the operations battle space. Dravis defines paramilitary operations as the nosiest of covert actions available to an intelligence operation, which can be directed towards achieving one or all of three specific goals. ...read more.

the operation had, "grossly miscalculated the intensity of counter-revolutionary fever amongst the population"28 OVF was slated to include a pre-operation propaganda offensive designed to win over the Albanians and pave the way for support elements within the country to begin to gather Albanians to the cause. However a ban on the Foreign Office conducting propaganda in Communist countries was not lifted until 1949, after the operation had begun.29 Even after the ban was lifted British Intelligence threw little resources at the propaganda war. It appears to be a case of win by arms alone. The Allies had no direct contact with the Albanian population, no embassy in Tirana and the BBC only broadcast brief 15 minute broadcasts to the region which was sent 90 minutes before the power was turned on in Albania cities.30 This miscalculation meant that there was never enough local support for the endeavour and that the formation of a popular revolution would never have succeeded. There were other miscalculations on the part of the Anglo-American planners. The use of a compromised �migr� population meant that the talent pool for the operation was muddy to say the least. Trahair suggests that the �migr� population of the Albanian exiles was most likely penetrated by the Soviet and Albanian security forces. 31 While supporting the premise that the blame lays with Philby even Bethell notes that the �migr� community was compromised. Before Phiby's betrayal was common knowledge, the Albanians involved felt that they had been betrayed, by the loose talk of compromised compatriots.32 Aldrich believes that the initial influx of Albanian �migr� agents from the displaced persons camp made it a certainty that a number of these �migr�s were already in the employ of the Soviet security forces. 33 This influx of compromised individuals meant that the Soviets had excellent counter intelligence on the operation and the means to roll up agents as they arrived in country. ...read more.

These factors in conjunction with the betrayal by Philby ensured that the operation was bound to fail. So poorly planned and executed was the operation that had Philby never betrayed his colleagues, it can be surmised that the operation would have failed to achieve its lofty goal of removing Hoxha and clearing a safe zone for further operations against the Soviets. Rather than a seriously planned, well executed and adequately supplied effort, OVF has all the hallmarks of the worst sort of boys own adventures masquerading as covert action. If the public has a poor level of regard for covert direct action by intelligence agencies we can see in OFV a viable reason for that distrust and derision. For intelligence agencies to be a useful tool of government policy they must run operations that are safeguarded against the sort of mistakes that spelled the inevitable downfall of the Albanian Operations of the early Cold War. For Anglo-American intelligence agencies the mistakes of OVF should have sounded a warning bell about the replacement of standard military operation with covert paramilitary operations. Throughout the Cold War we see the mistakes repeated, in the proxy wars in Cuba and Nicaragua. Noisy operations that failed to achieve their purposes or remain deniable. This is not to say that covert paramilitary operation do not have their place. When operated at their best level they can produce the sunning results seen in America's proxy war against the Soviets in Afghanistan, still a benchmark for covert paramilitary operations. If covert paramilitary operations are all that is left when a country decides that regular espionage is ineffective or unavailable and when standard military action is not an option, that country must ensure that the operation is supplied with good intelligence that is used effectively. It must ensure that its operatives are well trained and committed, that levels of tradecraft are maintained and that the operation is not subject to compromise. In short it must ensure that the mistakes that so crippled Operation Valuable-Fiend are not repeated. ...read more.