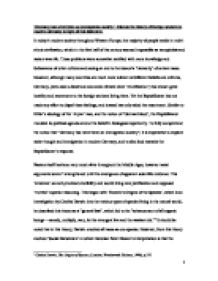 Germany has never been an immigration society. Discuss the history of foreign workers in modern Germany in light of this statement.

'Germany has never been an immigration society.' Discuss the history of foreign workers in modern Germany in light of this statement. In today's modern society throughout Western Europe, the majority of people reside in multi-ethnic civilisation, which in the first half of the century seemed impossible as xenophobia and racism was rife. These problems were somewhat rectified with more knowledge and forbearance of other cultures and seeing an end to the idea of a 'hierarchy' of certain races. However, although many countries are much more tolerant of different beliefs and cultures, Germany, (who saw a disastrous economic climate since 'reunification') has shown great hostility and resentment to the foreign workers living there. Yet the Republikaner has not made any effort to dispel these feelings, and instead has only aided the resentment. Similar to Hitler's ideology of the 'Aryan' race, and the notion of 'German blood', the Republikaner moulded its political agenda around the belief in biological superiority. To fully comprehend the notion that "Germany has never been an immigration society", it is imperative to explore racist thought and immigration in modern Germany, and to also look towards the Republikaner's response. Racism itself has been very much alive throughout the Middle Ages, however racist arguments weren't strengthened until the emergence of apparent scientific evidence. This 'evidence' as such provided credibility and would bring new justification and supposed 'truthful' superior reasoning. This began with 'Darwin's Origins of the Species', which is an investigation by Charles Darwin into the various types of species living in the natural world, he described this theory as a "general law", which led to the "advancement of all organic beings-namely, multiply, vary, let the strongest live and the weakest die."1 It should be noted that in this theory, Darwin credited all races as one species. ...read more.

9However, similarly to the United Kingdom with controversial party groups such as the British National Party, the Republikaner have denied any connections, and have tried to break off any connections. Yet this has only really been on a public front, as affiliates from these terrorist organisations have often been sighted assembling Republikaner rallies, this evidence clearly shows how the influence and huge amount of power assigned to such groups is due to the backing of the German public, showing once again, that being an immigration society was something Germany was simply not capable of. Statistics further support the argument that Germany is not an immigration society, because it is highly thought that the Republikaner are after the admiration and electoral reliability as seen in France, from leader Jean Marrie Le Pen. In the 1989 municipal elections for West Berlin the Republikaner obtained over 91,000 votes, seven and a half percent of the electorate. Then in June of the same year, they managed seven percent, which gave them six seats in Strasbourg. This shows on the whole an increasing surge of extreme right wing popularity in Europe.10 The victory in the municipal and European elections can be accredited to the Republikaner policies, which are all too familiar to the highly extreme right wing parties found surrounding Europe. The Republikaner aims were to tighten up the law to eradicate crime, to bring tradition back into Germany in light of dark times, including AIDs and denial of the Holocaust, and the most relevant objective, "the protection of natural and cultural identity allegedly threatened by third world immigrants, foreign workers and refugees11." ...read more.

Due to the backing from the majority of Europe, Germany has only served to give such radical policies justification of racism, which in turn, has only strengthened the Republikaner. To conclude, the scale of the Turk population (over one million) put them in the forefront to be most at risk from the Republikaner's policies and discrimination. It must also not be overlooked that the 50,000 gypsies within Germany, still suffer greatly despite over a million being exterminated under Hitler's Nazi Germany, as do other cultures such as the 40 to 50,000 afro-Caribbean Germans. The 'invasion' of ethnic Germans, however has caused a split for its followers. The Republikaner's views on immigration could ultimately annihilate the party. Ironically, their best chance for survival lies with the possible new voters from Eastern Europe, from the societies its current voters fear and resent as much as the Turkish people and the Poles. However, Jean Marrie Le Pen once stated, "I prefer my daughters to my cousins, my cousins to my neighbours and my neighbours to strangers." 16 This shows and sums up the overall feelings of the Republikaner and its followers rather well, and this essay has given sufficient evidence to suggest that perhaps the Republikaner will never be at risk of annihilation. This is because racism is not an innovative idea within Germany, but has become the foundations of Republikaner policy, foundations which have arguably been then long before their and even Hitler's reign, as foreign workers have become the scapegoats for all economic troubles throughout Germany's history, showing that they never have and never will be fully integrated into Germany society. ...read more.