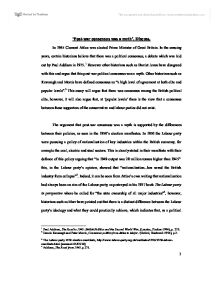 Post-war consensus was a myth. Discuss.

'Post-war consensus was a myth'. Discuss. In 1945 Clement Attlee was elected Prime Minister of Great Britain. In the ensuing years, certain historians believe that there was a political consensus, a debate which was laid out by Paul Addison in 1975.1 However other historians such as Harriet Jones have disagreed with this and argue that this post-war political consensus was a myth. Other historians such as Kavanagh and Morris have defined consensus as "a high level of agreement at both elite and popular levels".2 This essay will argue that there was consensus among the British political elite, however, it will also argue that, at 'popular levels' there is the view that a consensus between these supporters of the conservative and labour parties did not exist. The argument that post-war consensus was a myth is supported by the differences between their policies, as seen in the 1950's election manifestos. In 1950 the Labour party were pursuing a policy of nationalisation of key industries within the British economy, for example the coal, electric and steel sectors. This is clearly stated in their manifesto with their defence of this policy arguing that "in 1949 output was 28 million tonnes higher than 1945" this, in the Labour party's opinion, showed that "nationalisation...has saved the British industry from collapse"3. ...read more.

of the classic welfare state".10 This act was written by the conservative minister Butler, but was implemented practically by his labour successor following the 1945 election, showing a level of consensus as both parties had the same direction. Butler himself believed that a political consensus existed after 1945 especially between himself and Wilkinson the labour education minister as he said "both of us spoke the language of Keynesianism". This shows on this issue there was a definite political consensus that existed in the post-war era amongst the political elite. This feeling of consensus amongst the two parties can also be seen through the study of other policies which didn't really change between the different governments, for example foreign policy. In 1945 Ernest Bevin became the foreign secretary and essentially continued the policies of Sir Antony Eden with whom he had worked closely during the wartime coalition. Kavanagh and Morris point out that following the labour victory in 1945 Attlee laid out his main foreign policy aims which included "retreat from the Empire...[to pursue...Britain's role as a nuclear power and membership of the Atlantic alliance]", 11which they argue were policies that were accepted and pursued by conceding conservative governments as well. ...read more.

They argue that there were differences between the parties but these were only "differences of ruhetoric... and of emphasis". This links closely to Butler who stated that both parties spoke the language of Keynesianism, but they "spoke it with different accents and differing emphasis." This shows that a consensus existed at an elite level where it was most effective and apparent. 16 To conclude if we are define consensus as Addison did as "an historically unusual degree of agreement over a wide range of economic and social policies" 17then this essay has shown a consensus did exist in British politics in the post-war era as on certain key policies the Labour and Conservative governments had the same direction. Moreover Kavanagh and Morris argue that when Churchill was re-elected in 1951 most major "welfare...foreign and colonial [policies were] largely untouched", 18I believe this demonstrates the similarities of both parties policies and direction, which shows that consensus existed between the elite of the era. Although there were differences between the supporters of the political parties on ideological grounds these differences played a very insignificant role in fermenting the parties' direction as essentially a political consensus existed as both governments worked together in order to make Great Britain great again. ...read more.