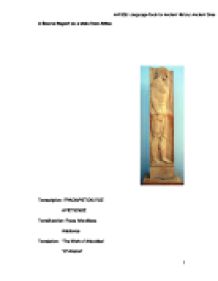 A Source Report on a Stele from Athens. The stele (also called stelai) of Aristion, so called because it is inscribed with the name of a man, probably a warrior, named Aristion.

A Source Report on a stele from Attica Transcription: EPAOIAPI?TOKLEO? API?TIONO? Transliteration: Eraoe Aristokleos Aristionos Translation: 'The Work of Aristokles' 'Of Aristion' Translation by David Gill, 2001, at http://www.davidgill.co.uk/attica/nm29.htm The stele (also called 'stelai') of Aristion, so called because it is inscribed with the name of a man, probably a warrior, named Aristion. It is written in the genitive form on the plinth, 'A?????????' which is how we can name it as the stele of Aristion. The stele depicts a painted soldier on the shaft, which has traces of red on the background, hair, beard and lips with blue on the helmet and the cuirass (Richter, 1961, p.47). The colour in its full form has faded. Stone stelai were very common in Greece especially after the sixth century BC when they became the primary method of grave memorial. There were three previous types; large painted pots, which marked the grave and acted as a 'receipt of libations' and was most popular in the ninth to the seventh century BC; chest-like structures of sun-dried brick, coated with stucco, surrounded by flat roofs and decorated with terracotta plagues, popular between the seventh and sixth centuries BC; and finally stone or bronze statues which depicted ...read more.

Along with this, Morris mentions that for the graves that we might find, it would only be those of the poorest in society as the wealthiest citizens would be 'exhumed, cremated and their ashes scattered on the sea' (Morris, 1987, pp.93-4). This is perhaps, another indication of how we can use the stele as a source of changing attitudes as with the grand designs of some steles during the archaic period, it is most likely that they were paid for by the rich. This is then especially true from the late fifth century to the fourth century BC where the stele 'reached its greatest artistic heights' with top sculptors being paid to produce reliefs of 'highly effective and varied composition carved on broad stelai crowned with simple pediments' (Wycherley, 1978, p.255). If we are to date the stele, then it would be best to follow Richter (1961, p.170) who states that with the oscillation between the nu of the archaic form within 'A??????�???' and the later form in 'E????' that the stele therefore can not be far off from the end of the sixth century BC with the inscription best being given a date in the last decade of the this century. ...read more.

We can as shown, see how this had been developed from the Geometric period of Greece and even before that. To be able to see why the Greeks treated the dead in the way they did is almost as important as how exactly they did this. Aristokles has provided us with this stele, an insight into how the average grave was constructed and what it contained; what was on the relief as well as what was written and where. Although this is not entirely like contemporary stelai which might list such things as the mourners, it is still a valuable insight in that we do not get to know who it is that is mourning the death of Aristion. The role of funerary commemoration within Attica can be seen an important issue as it deals with the sensitive nature of the deceased and the afterlife, with respect to the memories of the living. Much more importantly it can be used to show us the fluidity of this and how it was adapted over time with what we can only assume, seemed to them to be more fitting tributes to the dead. ...read more.