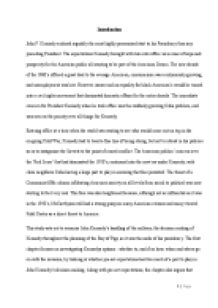 A study into how much John F. Kennedy was responsible for the failure of the Bay of Pigs and the influence it had on him in future crises.

﻿Introduction John F. Kennedy endured arguably the most highly pressurised start to his Presidency than any preceding President. The expectations Kennedy brought with him into office were ones of hope and prosperity for the American public all wanting to be part of the American Dream. The new decade of the 1960?s offered a great deal to the average American, consumerism was continuously growing, and unemployment was low. However issues such as equality for black American?s would be turned into a civil rights movement that dominated domestic affairs for the entire decade. The immediate concern for President Kennedy when he took office was the suddenly growing Cuba problem, and was seen as the priority over all things for Kennedy. Entering office at a time when the world was waiting to see who would come out on top in the on-going Cold War, Kennedy had to tread a fine line of being strong, but not to robust in his policies so as to antagonise the Soviets to the point of armed conflict. The American publics? concern over the ?Red Scare? that had dominated the 1950?s, continued into the new era under Kennedy, with close neighbour Cuba having a large part to play in ensuring that fear persisted. The threat of a Communist fifth column infiltrating American society on all levels from social to political was now starting to feel very real. This fear was also heightened because, although not as influential as it was in the 1950?s, McCarthyism still had a strong grasp on many American citizens and many viewed Fidel Castro as a direct threat to America. This study sets out to examine John Kennedy?s handling of the military, the decision making of Kennedy throughout the planning of the Bay of Pigs, as it was the nadir of his presidency. The first chapter focuses on investigating Kennedys options - whether to, and if so how, when and where go on with the invasion, by looking at whether pre-set expectations had too much of a part to play in John Kennedy?s decision making. ...read more.

This is a reflection of Kennedy being unduly reliant and too easily influenced by those few advisors he did trust. The CIA was relying on their perception that the Cuban people were struggling and disgruntled with a ?shortage of basic food and household items, felt by all levels of society,?[25] This again was part of the persuasion of Kennedy; if America were to invade and be successful, they would be heroes - rescuing the malcontents of Cuba and giving them liberty and freedom. Allen Dulles pre warned Kennedy that ?heavy rains would descend on the Caribbean by the end of April, necessarily delaying the invasion for weeks.[26] In short Dulles was telling the president that by no means can the operation be put back any further than mid-April. Chapter Three President Kennedy left Washington and travelled to Florida to spend the Easter with his family, It was during this trip the president decided to ?postpone D-Day to 10 April? and again this date was ?moved once again to April 17th.?[27] This hesitancy that Kennedy had been showing throughout out the planning vanished as quickly as it appeared. On return to Washington on April 4th Kennedy, had a change in attitude and displayed conviction for the first time in getting the invasion underway. McGeorge Bundy, President Kennedy?s Special Assistant for National Security Affairs, recalls that the doubtful attitude Kennedy had towards Cuba had gone. Upon his return from Florida Bundy states he ?really wanted to do this... when he came to the moment of truth?the decision to go or not go?he made up his mind and told us. He didn?t ask us.?[28] Kennedy had finally displayed the kind of leadership his presidency had so far been lacking. As everything was picking up pace, the New York Times reported that an invasion of Cuba was imminent, with a headline reading ?Invasion Reported Near.?[29] The report not only angered Kennedy into confiding to press secretary Pierre Salinger that ?Castro doesn?t need agents over here; all he has to do is read our papers. ...read more.

It was however his rebuilding of the conventional military that led him to be able to react to the situation, if he carried on Eisenhower?s doctrine of relying on a nuclear deterrent, there is no telling of what reaction could have carried out. Although Kennedy inherited the ?Cuba Problem? it was he who chose to lable it a crisis, knowing it would prove to be politically advantageous. He went ahead with the Bay of Pigs, which proved to be not only a disaster but also a positive. The Bay of Pigs was without question the catalyst for the Cuban Missile Crisis, it was also the result of the Bay of Pigs that produced the decision making mechanism that enabled Kennedy to find a solution to the Cuban Missile Crisis. Despite his legacy as one of the most popular Presidents in American history, there is no escaping his short term was style of substance. Kennedy lacked the experience necessary perhaps not only to handle the Bay of Pigs, but office in entirely. Kennedy?s management style of the military and its deployment was largely ineffective, with not only the Bay of Pigs being a failure, but also his decision to commit troops to Vietnam a poor choice. The Cuban Missile Crisis was an exception to Kennedy?s usually poor deployment of the military. His conservative approach was highly unlike Kennedy, and had the Cuban Missile Crisis happened without the Bay of Pigs being a factor, it is safe to presume Kennedy would have acted more aggressively. Kennedy fully understand the role the military had to play in his foreign policies, however he failed to acknowledge the importance the advice his advisors had to offer. His management style also restricted input from military experts, and his reliance to take advice from close knit circle advisors, who had little military experience, ultimately doomed Kennedy in all of his military deployments, apart from the Cuban Missile Crisis, which is the only reason his legacy is looked back upon in a positive way by most. ...read more.