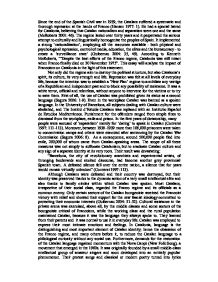 According to Kenneth McRoberts, Despite the best efforts of the Franco regime, Catalonia was still intact when Franco finally died on 20 November 1975. This essay will analyze the impact of Francoism on Catalonia in the light of this

Since the end of the Spanish Civil war in 1939, the Catalans suffered a systematic and thorough repression at the hands of Franco (Hansen 1977: 1). He had a special hatred for Catalonia, believing that Catalan nationalism and separatism were one and the same (McRoberts 2001: 46). The regime lasted over thirty years and it perpetrated the serious attempt to culturally and linguistically homogenize the peoples of Spain. It implemented a strong 'nationalization', employing all the resources available - both physical and psychological repression, control of media, education, the elites and the bureaucracy - to create a 'surveillance state' (Guibernau 2004: 35, 49). According to Kenneth McRoberts, '"Despite the best efforts of the Franco regime, Catalonia was still intact when Franco finally died on 20 November 1975". This essay will analyze the impact of Francoism on Catalonia in the light of this statement. Not only did the regime aim to destroy the political structure, but also Catalonia's spirit, its culture, its very strength and life. Repression was felt at all levels of everyday life, because the intention was to establish a 'New Plan' regime to annihilate any vestige of a Republican and independent past and to block any possibility of resistance. ...read more.

Only certain sectors of the Catalan bourgeoisie received the Francoist victory with relief and showed their support for the new fascist ideology committed to protecting their economic interests (Guibernau 2004: 51-52). Cultural resistance in the private arena was exercised, above all, by the middle classes and some sectors of the bourgeoisie critical of Francoism, while the working class and the rural population maintained Catalan, because it was the language they always spoke to. They learned from their parents and it was normal to use it in everyday life. Catalan was employed to express their most intimate emotions and feelings. In Catalonia, language is the distinguishing and most important element of Catalan identity; hence the obsession of the Franco regime, and many others before it, to reduce the Catalan language to a philological curiosity without any social use. Furthermore, demands for the restoration of the Catalan language regained momentum with the Nova Can�� (New Folk Song), a movement that emerged in the 1960s. It was originally founded by a small middle-class intellectual group of amateur singers and soon developed into an entirely popular phenomenon. ...read more.

This reflects a contrast between the two stages of defeat and renewal: early forms of opposition were virtually eradicated after the fall of Barcelona and barely survived till 1952 in the form of intermittent and weak guerrilla actions. But a new moderate opposition grew out of the social upheavals released by the milagro econ�mico (Conversi 1997: 139). To conclude, I do not agree completely with the statement from McRoberts that Catalonia was still intact after Franco's death. Francoist repression was enormously cruel and it had no possible comparison, not even with the other European Fascisms from before the Second World War. Not only did the Catalans lose their institutions and freedom, but also a whole generation of men and women who made up the cream of the cultural, associative and political life of Republican and autonomous Catalonia (Segura 2006: 12-16). Despite the situation, Catalonia had managed to retain its cultural distinctiveness, especially its language, and many Catalans remained convinced that they were a nation. Indeed, some observers consider that Catalonia is a model for other nations without state and that it demonstrates the irrelevance of sovereignty and other outmoded political nations (McRoberts 2001: 45, 180). ...read more.