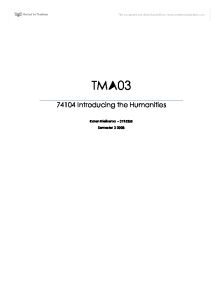 According to Rousseau, what was more important: the society/state or the individual?

TMA03 74104 Introducing the Humanities Karen Hielkema - 3195355 Semester 3 2008 According to Rousseau, what was more important: the society/state or the individual? Jean-Jacques Rousseau, a French philosopher during the politically turbulent time of the French revolution, maintained that the state was of more importance than a single individual, in that the needs of the many (the state) outweighed the needs of the one (the individual). The purpose of this essay is to explore this concept and its expression in the works of the artist Jacques-Louis David. Rousseau's focus was on political philosophy, rather than an exploration of the shape of the individual, this is the perspective on which the views expressed here are based. Much of Rousseau's commentary in "The Social Contract" focus on the individual as being a "part" of the state, and as having ability to exercise free will within that. This attitude is reflected, and conveyed in two paintings by Jacques-Louis David (The Oath of the Horatii, and the Lictors Returning to Brutus the Bodies of his Sons). These strong political messages featured heavily during the French Revolution, and in both these paintings an individual is depicted sacrificing personally for the best interests of the state or society (The Open University, 2005). ...read more.

Rousseau acknowledges that allowing the collective will to establish rules that govern individual conduct might be a form of relinquishment of individual rights. He takes the position that this apparent contradiction is resolved by the fact that it is in the interest of every individual to give the power of social policy and rule enforcement to the government, because without some form of collective power, the individual cannot enforce any legitimate social concerns at all. Rousseau's attempted to envisage a form of government that best affirms the individual freedom of all its members, with certain constraints intrinsic to a complex, modern, civil society. Rousseau strongly believed in the existence of certain principles of government that could afford the members of society a level of freedom that at least approximates the freedom enjoyed in the state of nature (Cranston & Rousseau, 1968). "The Lictors Returning to Brutus the Bodies of his Sons", is a painting by the French artist Jacques-Louis David in 1789. Having led the fight which overthrew the monarchy and established the Roman Republic, Brutus tragically saw his sons participate in a plot to restore the monarchy. As a judge, he was called upon to render the verdict, and without hesitation condemned his two sons to death. ...read more.

Looking at Rousseau's idea for government may seem unacceptable if not impossible to us, however, philosophy and ideology, which was prominent in the revolution, that control resides with the people - that "man is born free". Both Rousseau and democracy preserve the idea that government is legitimate only if it emerges from the people within the state (Cranston & Rousseau, 1968). Just as Rousseau used his publications to reflect on his ideas, David used his art as the media to reflect the ideas and values of the society in eighteenth century France. David's paintings can be seen as expressions of the desire for social, as well as aesthetic change. Both philosopher and artist support the notion of an elected state as having more importance than the individual. They both reflect the dissatisfaction of a country long "oppressed" by an aristocracy that was individually focused (on The King) at the time. Both sought freedom, and both expressed that desire using differing methods. The efficacy of David in using his art to convey this message is irrefutable, in the light of the monarchy requiring all art to be censored before being displayed. It is without doubt that Rousseau was also persecuted for his publications. These are two individuals that used their skill and talents to propagate change and "educate" a dissatisfied populace, propelling an entire country toward revolution and democracy. ...read more.