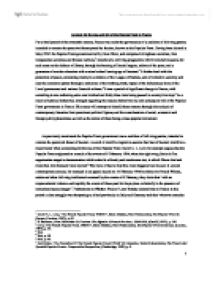 Account for the rise and fall of the Popular Front in France For a brief period of the twentieth century, France was under the governance of a coalition of left wing parties intended to counter the perceived threat posed by fascism, known as the Popular Front. Having been elected in May 19361 the Popular Front government led by L�on Blum, and comprised of eighteen socialists, four independent socialists and thirteen radicals,2 introduced a left wing programme which included measures for such areas as the defence of liberty, through the banning of fascist leagues, reform of the press, and a guarantee of secular education with a raised school leaving age of fourteen.3 It further dealt with the protection of peace, amounting mainly to a defence of the League of Nations, and of collective security; and also the economic sphere through a reduction of the working week, repeal of the deflationary laws of the Leval government and various financial reforms.4 It was a period of significant change in France, with according to one reckoning some one hundred and thirty three laws being passed in seventy two days.5 As a result a historical debate has emerged regarding the reasons behind the rise and subsequent fall of the Popular Front government in France. This essay will attempt to identify these reasons through the analysis of contemporary literature from prominent political figures; and the consideration of social, economic and foreign policy phenomena as well as the notion of there being a mass popular movement. ...read more.

Jackson for example attributes the riots of February 1934 to an institutional crisis and a crisis of regime, which resulted from the depression.17If this is the case then the depression would be a hugely important factor in the rise of the Popular front because it would have created an atmosphere in which the popular mass movement was able to grow and thrive; and as elaborated upon earlier this movement was pivotal to the joining of the left parties and thus rise of the popular front. Evidence for this notion can be taken from the social categories which suffered most as a result of the depression; apart from the unemployed the most affected were the Classes Moyennes: the peasantry whose real income fell by some 30% between 1930-35, small business owners and shopkeepers.18 It is these very groups who arguably made up the bulk of the mass popular movement for the Popular Front. The PCF was able to mobilise these groups through emphasis of limited demands (Revendications partielles), where the party would translate concrete material demands into political action; this can be seen in Bagneux, a suburb of Paris where in 1935 communist activists took over and reinvigorated the Tenants Association, in response to the grievances of residents of the new cheap housing developments who had been neglected by the municipal council; allowing the residents to express their views politically.19 Given the importance of the mass political movement of the people to the rise of the popular front, the fact that the depression was able to create ...read more.

1934; and the effects the economic depression was having on the classes moyennes created a political climate in France in which the different elements of the left were able to unite. This is significant because once the left became united they became able to mobilise the classes moyennes through various strikes and factory occupations, creating a mass popular movement which carried them into power. The fall of the Popular Front can largely be attributed to the government's handling of several issues such as the crises in Spain and Czechoslovakia. With regards to such issues Haslem argues that 'popular front policies... tended to accentuate the splits in the left rather than heal the divisions'.30 This lack of unity would have made it nearly impossible for the Popular Front to fight the mass movement against it, instigated by employers seeking to regain concessions they had been forced to make earlier. The result of this movement, chiefly the loss of union credibility decimated support for the Popular Front rendering it in reality unable to continue in power. The mobilisation of the classes moyennes resulting in a mass popular movement can be seen in both the rise and fall of the popular front; carrying the government to power on a wave of popular support before bringing it down by accentuating existing divides between the different elements of the left. It is a theme central to the history of the Popular Front in France and as such is arguably the most important factor when accounting for its rise and subsequent fall. ...read more.