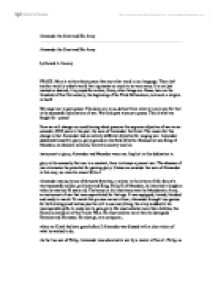 Alexander the Great and His Army.

Alexander the Great and His Army Alexander the Great and His Army by Gerald L. Conroy PEACE. More is written about peace than any other word in our language. There isn't another word in today's world that represents so much to so very many. It is not just wanted or desired, it is prayed for as few, if any, other things are. Peace, here on the threshold of the 21st century, the beginning of the Third Millennium, is almost a religion in itself. We wage war to gain peace. This does not, to us, detract from victory in any way for that is the successful culmination of war. We think past victory to peace. This is what we fought for - peace! Now we will change our conditioning about peace as the supreme objective of war as we consider, 2300 years in the past, the wars of Alexander the Great. The reason for this change is that Alexander had an entirely different objective for waging war. Alexander dedicated himself to glory, glory gained on the field of battle. Because he was King of Macedon, an absolute monarch, the entire country was his instrument to glory, Alexander and Macedon were one. Implicit in this dedication to glory is the necessity that war is a constant, there is always a present war. The absence of war eliminates the potential for gaining glory. Unless we consider the wars of Alexander in this way, we miss his raison' d'etre.1 Alexander was surly one of fortune's favorites, a winner in the lottery of life. Son of a very successful soldier, politician and King, Philip II of Macedon, he inherited a kingdom when he was but 20 years old. The bonus in his inheritance was the Macedonian Army, an instrument of war that was unparalleled for that age. It was equipped, trained, blooded and ready to march. To match this proven marvel of war, Alexander brought true genius for both strategy and tactics plus the will to use everything, the army wedded to his incomparable gifts, to make war to gain glory. ...read more.

The Persian commander in front of the phalanx moves to intercept and flank the phalanx, this stretches his defensive line, immediately noted by Alexander who smashes into the weak spot with the Companion Cavalry, crumbling the Persian Center. Here the phalanx maneuvered and pulled substantial enemy forces with it. As these forces moved to continue to oppose the phalanx, the Persian commander did not use reinforcements to shore up his stretching (thinning) line and lost the battle.13 It is this ability to gain victory from using these many different components of the army that made it so unique and indomitable. Great generals, given the same tasks to perform, will develop the same principles to govern their actions. These principles are constants, always in mind, somewhat like building blocks because there is an order of time to them. Two hundred years before Alexander a great thinker and general in far off China wrote extensively on war and how to make waging war successful. His name was Sun Tzu.14 Most of his ideas read like Alexander's outline of what he must do to be victorious over the Persian Empire. It is all but certain that Alexander had no idea of Sun Tzu's writings, but Alexander's actions confirm the premise that great generals come up with the same principles. Alexander first made an estimate of the situation, then secured his base and cleared his flanks. He sized the initiative in virtually all his operations and demonstrated a seemingly endless flexibility in his battles. These principles are those of Sun Tzu, as well, and subscribed to or practiced on the field of battle by all the great captains who follow Alexander down through the centuries. If there is one thing that stands out in the generalship of Alexander, it is the complex process that must take place in his mind to give him the initiative. He seems to have an innate feel for what he must do so his actions are the dictating moves of the skirmishes and battles to come. ...read more.

At the same time, the careful supply of the army, even in deserts and mountains was managed by Alexander's staff. This care on the part of their commander was to the men in the ranks another reason to love Alexander to the extreme that we see during the campaign. Granted Philip had changed the amount of comestibles carried by the average soldier, possibly to as much as a 30 day supply. These are factually unknown and we must assume that the Macedonians had supplies waiting for them at any critical point on their marches. This would mean any time their existing food would get below three or four days supply. Please see Appendix D28 for tables showing grain and water requirements.29 The only thing we know that is absolutely certain about Alexander's logistics is that they worked admirably. The logistics of the Macedonian Army are as much of a marvel as the army so well served by them. In the end, along with his incredible victories, Alexander is a great tragedy. Certainly he came closer to achieving his dream than almost anyone else in all of history. The point is that it was his dream, Alexander's personal dream. The graves of tens of thousands of Macedonian soldiers and hundreds of thousands of their opponents are the untold story of Alexander the Great and all conquerors who must use up other peoples lives to achieve their dream. The dreams of those men in the ranks and the bereaved wives and children are simply disregarded. Each of them, by their participation in Alexander's dream helped make it a reality. It was their reality, they lived it, but it was not their dream. 30 For those who died on the mud banks of the Granicus, slipped beneath the salt water surrounding Tyre, fell from a cliff face in the Hindu Kush, choked on a mouthful of sand in the Gedrosian Desert, or pined away all or part of their life waiting for the return of a husband or father, Alexander's accomplishments were no reward at all. Alexander's dream was, truly, their nightmare. ...read more.